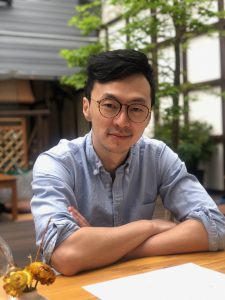 Ruijiao Dong is a Ph.D. Candidate in Theatre and Performance Studies at The Graduate Center, CUNY. The focus of his thinking has been the entanglement between Chinese cultural discourse, western modernity, and theatrical professionalism. His dissertation theorizes the reciprocal constructing, construing, and canceling between professionals and amateurs in theatre as an analytical paradigm, and he applies this paradigm to analyze the professionalization of Chinese theatre in the past century and contemporary, offering a new angle for thinking about art, culture, and humanities in general. His writing has appeared in TDR: The Drama Review and several Chinese magazines and newspapers. He currently teaches as an adjunct instructor at Baruch College, and has also taught at Hunter College and CUNY School of Law. He has obtained an MA degree in Performance Studies from New York University and an MFA degree in Creative Writing from the City University of Hong Kong. Before committing to academic research, he worked for China’s National Center of Performing Arts as a theatre educator.