Perhaps it’s my own naiveté, but I was sure the grand jury would come down on the right side of history this time. But once again, I have lost faith in our criminal justice system to serve justice. Michael Brown’s death was unnecessary, as was Eric Garner’s. Both were the result of excessive force from law enforcement officials. Makes you really step back and wonder what laws are being enforced — and for whom.

Just after Michael Brown was shot on August 9, I co-organized a demonstration in New Paltz in solidarity with those who had taken to the streets in Ferguson and across the country to protest racist acts by police. It was the first time I was involved in a country-wide action in a location other than New York City in over fifteen years. As a New Yorker, I’d become accustomed to scouring my Facebook and Twitter feeds, emails and texts with info on ad hoc protests that would evolve within minutes or hours after events that warranted civil unrest — and I’d grab a home-made sign and take to the streets. The demo in New Paltz was a far cry from the Trayvon Martin demo that stopped traffic at multiple junctures throughout NYC and actions by teachers for Trayvon, or Liberty Square during the Occupy Movement and the marches that packed NYC streets during that time. But even though the crowd we drew was small, our voices were loud. It was clear that here, too, there are people who are aware of and angry about the fact that racism still exists in both overt and tacit ways.

In the days following the Ferguson grand jury decision not to pursue a trial investigating Michael Brown’s death, a colleague in the Black Studies Department at SUNY New Paltz encouraged faculty to take a moment of silence at the start of each class to reflect on what had just happened. I took this request a step further, and planned a writing and discussion activity to talk about what had happened and the implications of living in a racist society on our work as teachers. As an educator who teaches aspiring teachers how to teach reading and writing, I cannot teach a course without hitting on topics of diversity and the many -isms that continue to pervade our society’s dominant discourse. I saw talking about Ferguson as a natural extension of the work that I already do. 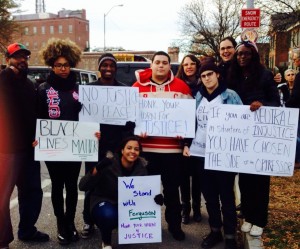 n one class, the discussion went well — one student piped in that she saw me in a photo on Facebook at a protest in Kingston, NY, and others expressed how much it influences what they hope to do as future educators of young children. Other students expressed being unclear of what had happened and wanting to know more about why and how the decision had been made not to pursue a trial and indictment.

In another class, the discussion didn’t go as well. What began as a well-intended carving out of safe space to talk openly about what had happened erupted into a contentious conversation about, in large part, whose fault it is that racism still exists. I wondered in the process of where I’d gone wrong as a facilitator. How did our discussion go from a reflection on the racist underpinnings of recent events and their ramifications for our work as educators to a debate on whether or not white people should be held responsible for slavery generations later?

I was able (somewhat inelegantly) to bring the conversation back to the purpose at hand, and concluded the discussion by asking students to write me an anonymous note on what they were thinking and feeling in the moment as the discussion concluded. It took me several days to take a look at these pieces of paper, which I knew would be swollen with personal feelings and thoughts on how or why talking about Ferguson matters (or doesn’t).

For the most part, students expressed that they felt uncomfortable talking about race, but that they were glad I’d brought it up.

More than half of them expressed that no one had brought up Ferguson in their other classes, and they felt it needed to be talked about more.

On the other end of the spectrum, a few students felt alienated by the discussion and asked why we were talking about this when they were here to learn how to teach literacy.

I haven’t been able to stop thinking about this experience and what needs to shift in my teaching and that of my school community as we work collectively to move toward a more aware, more diverse, more just society. I am in discussion with colleagues around campus who are committed to anti-racist work in both their personal and professional lives. In the meantime, something urgently in need of attention was revealed to me in the discussions I had with my students that I hadn’t been fully aware of before: I’ve been operating from a place of assumption. I assumed that in a small Hudson Valley community that is known for its liberal ways of thinking that we were all on the same page about race — namely, that we’re aware racism is still at work in communities of education, and talking about and acting in resistance to it is part of what we do. It turns out that’s not a safe assumption at all.

I am saddened by this new knowledge, but will not stop fighting for what I know is right; will not shy away from raising difficult topics of discussion in courses on teaching literacy when it’s so obvious how all -isms are deeply embedded in literature we may choose to share with young learners; will not stop naming racism as something worth examining in our daily practice as teachers and teacher educators. I thank the colleagues and students who have openly and honestly engaged in discussions with me over the last few weeks about the work that we do, and how racism places a role. Our work has only just begun.