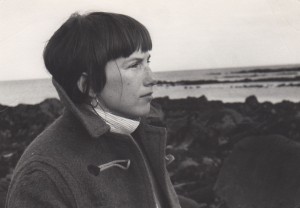 It’s a year today since Jean Anyon passed away. That length of time feels simultaneously like the blink of an eye and forever. She was respected, admired, and loved by many. And though I can make no particular claim about the relationship she and I had while I was her student over that she had with anyone else, there is an undeniable ache in my heart still when I think of her.

I often return to this photo of her when I miss her. Although I think it was taken at the Jersey Shore, it reminds me of the Breakwater in Mattituck, NY, which I lived near for a brief time as a child, and where I used to go to escape. I like thinking of her this way — at the water’s edge, contemplating the possibilities, her thoughts known only to her.

Like so many people I know, death has punctuated my life, has made me hurt, has brought sadness when I’ve needed hope. But it has also cemented connections with other people in ways that I never could have predicted. After Jean’s death, I have been grateful to be held — both digitally and in real-time — by individuals who were also touched by Jean’s life, ideas, and dedication to her work. The love I feel for that group of people was established when we met under Jean’s tutelage, but has been concretized in the last year by the outpouring of care, advice, and there-ness that we have shared with one another.

The biggest challenge to me in Jean’s absence has been the ability to write. It sounds silly — it’s completely psychological — but for eight years, she read everything that I wrote. Without her feedback as a safety net, the keyboard has felt more like an obstacle than a tool. Only in the last week or so have I been able to start facing drafts that, for a year now, have been frozen in time. It feels good to move to a new place with writing, though I am somewhat surprised it’s taken as long as it has. It’s amazing what a year can (and cannot) do.

RIP, Jean. We miss you still, and as you wished on your last night with us, we will always — always — remember you for your work.