As I push forward with data collection for my dissertation, I keep returning to the idea that history can repeat itself. And indeed, there is something repetitive — or even static –about the way the New York City public school system implements new reforms and policies.

I taught 5th grade from 2002-2006, during which a new standardized curriculum requiring a teaching method called the workshop model (defined by the the NYCDOE here) took elementary and middle school classrooms throughout New York City by storm. For some, the idea was not new and had either been introduced at an earlier time in their career or taught in a teacher education program; for others, it was an unfamiliar concept. But regardless of familiarity, many of us — particularly those of us teaching in schools with a lack of appropriate resources to do our jobs as required — the workshop model created the necessity to adapt behind closed doors.

As an example, there was the rug issue. Part of implementing the workshop model required a space in the classroom for students and teacher(s) to gather for a lesson, and creating a space with a rug for students to sit on made sense. In many schools it was compulsory. However, rugs were not provided by the school; nor was their cleanliness routinely maintained, which sometimes resulted in ongoing bouts of ringworm or infestations of lice, bed bugs, or other vermin.

In response to this expensive (and at times unsanitary) quandary, teachers were forced to adapt. Some had students gather chairs in a makeshift meeting area without a rug, or had them drag desks around in a way that created a sense of a meeting space, or, less desirably (especially for the watchful eyes of administrators), they eliminated the meeting portion of the workshop model altogether. Oftentimes, these adaptations resulted in reprimand and/or placing blame squarely on the teacher’s shoulders when test scores did not rise.

And while the Sisyphean practice of chasing the intended implementation of new policies like the workshop model without the means to do so seemed brand-new to many of us at the time, educational historians teach us that adaptation in the face of unreasonable or unrealistic policy expectations is not a new phenomenon for teachers in New York City. In a discussion of the introduction of new, progressive-education-based policies in city schools between 1920 and 1940 (shockingly similar to those “introduced” with the workshop model), Larry Cuban writes, “For teachers, contradictions multiplied as they tried to resolve the tensions generated by partisans of progressive pedagogy and the daily realities they faced in their schools” (1993, p. 113), and concludes, “The results were classrooms where contradictory behaviors appeared in an uneasy, often fragile configuration” (1993, p. 114). His words could also describe my experience many years later. 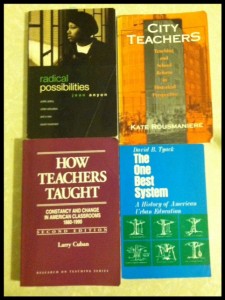 As I climb deeper into my data, I find myself revisiting the four books pictured: Radical Possibilities by Jean Anyon, City Teachers by Kate Rousmaniere, How Teachers Taught by Larry Cuban, and The One Best System by David Tyack. Each of these volumes takes a slightly different approach to the history of teaching and the policies that surround education, and not all focus solely on New York City; however, each helps me illuminate the idea that the pendulum of education policy has a tendency to swing back and forth, creating a sense of running in place without addressing the root of the problem which, often, comes down to a lack of necessary funds and resources.

There have been constant reforms in New York City schools in the last 100+ years, and yet accounts of teachers’ work almost a century ago are, in my opinion, too similar to today’s. It is my hope that we can find a new path — one that doesn’t have us constantly spinning our wheels.