I went to a story telling workshop yesterday at the CUNY Graduate Center (GC) with Wendy Luttrell and David Chapin, and it was a lovely departure from business as usual. The gathering was set up with minimal guidance, with a purpose: to see what would evolve. About fifteen (give or take) people came, and we sat around a table for two hours sharing stories, swept up in the tales of other people’s lives. Personal and professional stories alike were shared, and unintentionally, a theme of seeing-but-not-seeing could (loosely) be strung through each of the narratives. One of the facilitators started out by explaining that so often at the GC we pass by one another without seeing each other; I found this to be very powerful, and related to my daily work as a researcher and educator.

The workshop made me want to really think about why story has such important meaning for me. So this post is a brief history to that end.

My grandmother was the queen of story telling in my family — she would string many stories together in one evening, often without taking a breath (or so it seemed). During these sessions I learned about her first love, who died on a U-boat; her journey to America from ‘the other side of the ocean’; how money was always a struggle; and so on. As she was getting sick (about two years ago now), we would spend time on the phone every morning, clucking like hens about the past, present, and future while we knitted. Storytelling and yarn (the wool kind) formed a hybrid language that we shared.

In college, I was required to write a senior thesis, and having lost a close family friend to AIDS in the mid-80s, was determined to do research somehow related to the disease. I ended up spending the summer before my senior year in college in San Francisco, interning at the San Francisco AIDS Foundation and their HIV Prevention Program, a needle-exchange program. I interviewed HIV+ intravenous drug users, and spent a lot of time feeling angry about the fact that their voices were rarely heard. This experience would shape my interest in and method of conducting research for years to come.

The summer after my senior year in college, I interned at the New York City AIDS Housing Network. During my time there, the executive director of the organization initiated an oral history project, and part of my work was to interview homeless or formerly homeless, HIV+ individuals about obstacles to housing and health care. During both summer internships, I routinely cried. I couldn’t fathom why a society would so actively silence the voices of people whose needs were so dire.

Then I became a public school teacher in New York City. I was (initially) required to supply my own library; little of what I learned in my masters program was applicable in my classroom; contradiction and inconsistency were the only constants. I found my own voice being silenced, and that of my students and their parents. So I turned to the internet and the emerging blogosphere for hope. And also a megaphone of some kind.

I think that’s why my fascination with blogs is what it is: there is something about blogging that offers a space to be heard and connect. Even if no one reads a post, it’s still there, in a public space, discoverable if you look hard enough. And of course timing is context: I’ve come of age at a time when digital communication has changed everything. I’m sure blogging will take on a different meaning as time marches on, and it will no longer seem so unique. But for now, it is a way to hold stories in a public-yet-private way — something that wasn’t possible before.

For my next post, I’m going to return to my journals from my first years of teaching again. There are many more stories to be told. 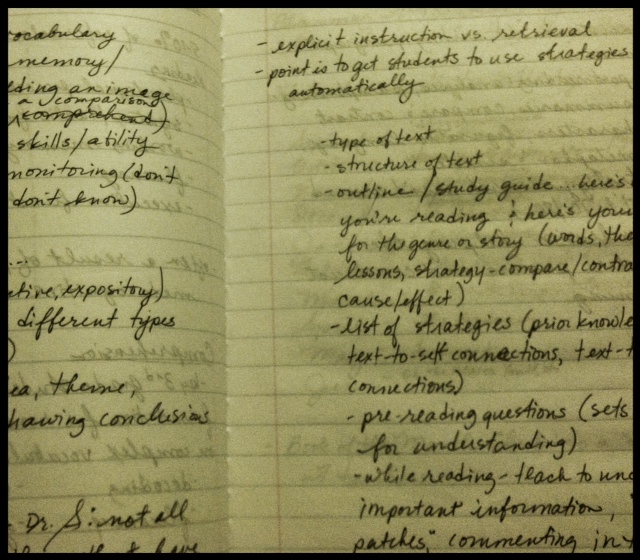