As noted above I spent the day reading about MOOCS and walking the dog in the snow. Both projects seem somehow circular. After reading the following:

(this is just half the ‘assigned readings’ for this week, praps I’ll read the rest tomorrow).

After reading Shirky’s piece I was compelled by his argument that MOOCS might at least be equivalent if not superior to the typical large lecture hall format. But I have since returned to near my original position that MOOCS can’t provide the interpersonal connections and experiences that make learning dynamic and exciting to me.

For example, last semester I graded nearly 100 undergrad papers. Although I did my best to explain each comment, many students still needed to meet with me and discuss specific structural and conceptual comments. Perhaps this can be done online, but somehow track changes came up short. It was only when a student and I sat across from each other and reviewed each comment that I noted a look of understanding that was often reflected by improvements in their next paper.

In addition, there are interpersonal aspects of sharing a space with other learners that I’ll address in the next post.

On another note after nearly three hour long walks in the blizzard with Boomers she too has come full circle and is almost due again. 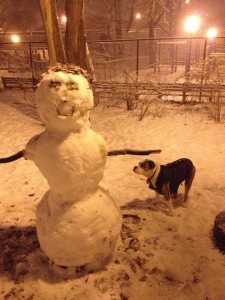