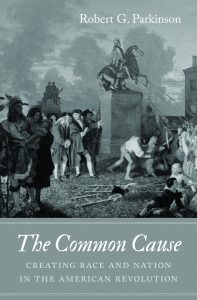 Civics curricula in the United States teach us a particular narrative about the American Revolution in terms of its origins and motivations. This prevailing story is that the ideas of liberty, property, and equality unified thirteen diverse colonies under what was known as the “common cause.” This process was supposedly an organic one, and was founded in the people’s belief in democratic values.

Robert Parkinson, an Assistant Professor of History at Binghamton University, provides a radical departure from this narrative in The Common Cause: Creating Race and Class in the American Revolution, published this past May by the University of North Carolina Press. Parkinson shows that — for the patriots at the fore of the Revolution — turning colonists against their cultural and ancestral cousins was no easy task, and certainly was no accident. The essence of his argument is that the patriot coalition consciously and proactively used newspapers to propagate and disseminate revolutionary ideas. Furthermore, he argues that the ideals of life, liberty, and the pursuit of happiness were only partially responsible for the fervor of the revolution, with racial fears resting at the heart of the discourse.

Parkinson makes exhaustive use of evidence from well over fifty different newspapers from across the colonies to present his thesis that the patriots, in their pro-revolutionary newspaper propaganda campaigns, participated in race-making that would come to define citizenship and liberty in the United States for decades to follow. Patriots capitalized on latent fears of slave insurrections and of Native American hostility, painting both groups as dangerous agents of the crown. In November of 1775, the Earl of Dunmore, who was the last of Virginia’s royal governor, issued a proclamation that promised to free slaves whose enslavers were rebelling against the crown and who were willing to fight for the British.

Dunmore’s Proclamation  proved to be a spark for this racially-charged Patriot propaganda. Stories of imperially sanctioned violence by these groups spread like wildfire through colonial presses. Parkinson argues that these fears, perhaps even more so than the positive good offered by republican democracy, united the colonies around the “common cause.” More importantly, he points out the collateral effect of this propagation — as the subjects of these depictions, Blacks and Native Americans were excluded from the “common cause” and from the liberty that it promised.

Parkinson’s work is, in many ways, a masterful achievement. With The Common Cause, he’s crafted a text that is both accessible and comprehensive. It is truly rare for a book that fundamentally reframes the historiography on the Revolution to be accessible to such a broad readership. This text is an important contribution to many different historiographical strains: the places of race and class in the Revolutionary struggle, the long history of media propagation towards political ends, and the disparities between memory and reality in our nation’s founding.

Likewise, the shortcomings of this text are few and far between. Parkinson misses an opportunity in not taking a firm stance on the role that the Revolution ultimately played in the long history of slavery and abolition. There is a debate within the historiography on the post-Revolutionary trajectory of slavery in the North, and Parkinson perhaps over-emphasizes the gradualism of northern abolition in the late eighteenth and early nineteenth centuries. While he acknowledges recent work on abolition and the Revolution, much of which has come out of the Graduate Center History Department in the last few years, perhaps he is lacking a complete exposure to and understanding of that scholarship.

This misstep on the part of Parkinson is pervasive in scholarship on the Revolution. His work is more nuanced than many others, but in some ways falls into the trap of “racial consensus”—the assumption that Whites in early America were essentially in agreement about the inferiority of African Americans. This leaves several questions unanswered: How did the abolition of slavery come about in Northern states so quickly after the war? How did we find ourselves at the Emancipation Proclamation less than a century after the Revolution? It cannot be denied that the Revolution established the status of the “free African American,” and this reality warrants further interrogation.

Another miscalculation of this text that stems from the same framework is the conflation of the myriad issues and debates surrounding African Americans in the early republic. Parkinson’s evidence does a good job showing how the “common cause” by and large excluded Blacks from citizenship. It further shows that the Revolution further stoked fears of slave rebellion among Whites. Neither of these things necessarily tell us a great deal about what the Revolution did for sentiments about abolition and emancipation, and yet Parkinson conflates them all into a singular issue. This oversimplification of debates around race in early America is just one of many reasons why much of the scholarship has missed Northern antislavery sentiment after the Revolution.

When one thinks of media-wielding elites affecting political change by exacerbating fears of racial “others,” their minds are far more likely to be drawn toward 2016 than 1775. By turning a foundational American narrative on its head, Parkinson provides stunning evidence of the long history of propaganda and fear in the political dialogues of the United States. His work can perhaps help to contextualize our modern abundance of fear-based politics in the media, and their effectiveness within populist movements.

Historians once approached an understanding similar to Parkinson’s; there are multiple texts from the 1930s and 1940s regarding the American Revolution that feature the word “propaganda” in their titles. However, encounters with fascism and the rise of the Frankfurt School momentarily shifted how we understood media propagation, and this historiographical strain was lost. While attempting to not be overly cynical, I highly doubt that many elements of Parkinson’s alternative narrative of the Founding Fathers and the Revolution—one of media power and racial fears—will replace the origin story presently found in public school classrooms. However, I look forward to seeing how scholars build upon Parkinson’s book, and how other narratives that flow from the Revolution will be reframed to account for his work.

Writing Resistance in the Age of Surveillance: A Comparative Review of Steven Salaita’s Uncivil Rites and Moustafa Bayoumi’s This Muslim American Life

Demonetization in India: The Political Economy of Waiting Time