Stranger in my Skin: Racial (un)belonging in the US

This article was first published as a different draft, “Perpetual Stranger in the U.S,” in the first issue of a new student publication, The Korean Student Association (KSA), of the Graduate Center.

Although my parents had frequently made me cognizant that I am Korean, it had always been difficult for me to fully accept that identity since I have always lived in the U.S. and did not grow up around other Koreans. Now, however, I live in an area with a large Korean population. Yet why do I feel like a stranger? I was born and raised in Atlanta, Georgia, years before the 1996 Summer Olympic Games helped transform it into the international city it is today. I spent my formative years growing up in a predominantly White neighborhood. The elementary, middle, and high schools I attended were composed of roughly half Black and half White students. There were only a small handful of South and East Asian students. And I had no Korean friends because there were none to speak to. After I attended a predominantly White liberal arts college in the Midwest, I lived in a few

different Black neighborhoods in Atlanta. Years later when I moved up north to New York City, I lived in two different neighborhoods in Brooklyn: Park Slope — an affluent White neighborhood — and Crown Heights — a predominantly Black Caribbean neighborhood. While I largely had good experiences living in most of these places, I stuck out like a sore thumb because I was always the only or one of just a few Asians around. Throughout my life, I have been accustomed to being a racial/ethnic minority wherever I found myself, whether it was at school, work, neighborhood, or play.

Although certain northeastern suburbs of Atlanta are now home to a growing and thriving Korean community, this was not the case during my formative years in the 1980s and 1990s. After initially living in a low-income neighborhood of Atlanta called Lakewood in the 1970s, my family settled in Stone Mountain, a suburb located a few miles east of Atlanta city limits. Although Stone Mountain is home to a large memorial to the leaders of the Confederacy who condoned slavery, you may be surprised to hear that I actually did not experience much prejudice (or, at the very least, I wasn’t aware of it) based on my ethnicity during my first few years as a sentient being. I was one of a few Asian students at my elementary school and I knew that I was a little different somehow and that my parents spoke a language other than English at home, but I had not yet been indoctrinated in the race-conscious ways of the world. However, this grace period ended just a few short years later.

When I was six years old, my parents sent me to a two-week-long summer camp at Stone Mountain Park. The majority of the other kids and camp counselors were White. From the first day, a group of boys marked me as different because I was “Chinese.” They targeted me every day and the attacks were verbal and physical. They shouted insults like “chink” and “ching chong,” and sang the song “Me Chinese, me play joke, me put pee-pee in your Coke.” They also told me to go back to my country, which was very confusing to me since I was pretty sure that I was already in my country. This particular line would become a recurring refrain throughout my life. The physical bullying ranged from kids pulling up the sides of their eyes to mimic my “chinky eyes” to boys cornering me and taking turns putting me in headlocks and hitting me. Some of the boys asked me why I did not know Kung Fu like Bruce Lee, which was actually the first time I had ever heard of him. I know that I engaged in some fun activities at the summer camp such as swimming, hiking, playing sports, and making crafts, but I mostly remember being bullied relentlessly, feeling alienated, and wanting to go home. I told my parents I never wanted to go to summer camp again.

In 1978, when I was two years old, my parents purchased a small wig store in Decatur, just outside Atlanta city limits. The majority of their customers were old, middle-class White women. However, a few years after they bought the store, there was a massive White flight, and the neighborhood transitioned into a low-income Black neighborhood. Not surprisingly, I did not comprehend the racial dynamics that I witnessed. In my young and inexperienced eyes, all I could see was Black customers calling my parents “chinks” and also telling them to go back to their country. I found it curious that Black people were using the same rhetoric as the White kids at summer camp. I could not understand why our skin color and almond-shaped eyes seemed to make other people so upset. Of course, it was not until years later that I would learn about slavery, Jim Crow, institutionalized racism, middleman minority theory, and deeply-embedded structural factors that keep the cards stacked against Black people. However, that still did not explain the animosity that I seemed to experience from all directions. And more than that, it still did not make me want to identify as Korean or Asian.

In high school, I had an epiphany when my sister and I discovered and latched on to the punk rock subculture. Although punk’s music, style, and ethos appealed to us, in hindsight, I can clearly see that it also served as a buffer for our racial difference. Instead of allowing others to impose a foreign racial identity on us, adopting the physical markers of punk rock, such as black leather jackets, combat boots, and crazy haircuts allowed us to choose our identity and have some sense of control over how we presented ourselves and were thus perceived by others. Instead of just being Asian or Korean kids, we became “those crazy punks” or “freaks,” which, believe it or not, was preferable. In that sense, we were able to dictate how we were Other-ed. Although I was still very much on the margins of mainstream American society, this was the first time that I felt proud of being different.

Song title: Another the Letter

Song Title: Judy is a Punk

Punk rock helped broaden my perspectives. Rejecting the mainstream media that was being shoved down everyone’s throats encouraged me to explore other genres of music, subcultures, underground cinema, fine art, street art, and literature. It made me want to travel and get outside of my comfort zone. It was like a gateway to aspects of culture and the world that I never even knew existed. Although my newfound interests led me to meet some friends who were people of color, many of these subcultures were largely composed of White people. However, I grew to feel pretty comfortable and accepted, perhaps because I identified primarily as a punk or an artist. Being Asian or Korean was secondary, and most people that I met during this period in my life rarely even brought up race.

After living in Brooklyn for several years, in 2015, I moved to Flushing, Queens, which is home to a large Chinese and Korean population. For the very first time in my life, I was surrounded by people who look like me. One might assume that I would feel comfortable living among other people of Asian descent. While I must admit that I do sometimes enjoy feeling anonymous around people who are obviously not paying any attention to me based on my race, I still do not feel like I belong. Many of my neighbors are immigrants and I hear far more Mandarin, Korean, and Spanish than English in Flushing. While there are also many U.S.-born children of immigrants who are hyphenated Americans just like me, many of these young people have grown up in this area and are accustomed to the particular brand of multiculturalism that Flushing has to offer. For the most part, people in Flushing seem to self-segregate based on nationality. The Koreans live in certain areas separate from the Chinese. This becomes even more obvious when looking at the business districts. The area around downtown Flushing and the subway station is dominated by Chinese restaurants and other types of businesses, whereas the Korean business district begins east of Union Street. Even the Joseonjok (ethnic Koreans who were born and raised in China) have their own little residential and commercial pocket.

Although I grew up in a household where my mother mostly spoke to me in Korean, I only speak simple conversational Korean and I do not have mastery of the language or customs. Ironically, when I am surrounded by Blacks, Whites, and other non-Asians, I am very conscious of my “Asianness” or “Koreanness.” And when I am surrounded by Koreans or Chinese, I suddenly feel extremely American. When I enter a Korean establishment, I often feel like a fish out of water. Koreans instantly recognize my accent and intonation as American, and I still feel slightly awkward when engaging in conversation, tilting my head when I say hello, goodbye, or thank you, or even trying to order food or ask for the check. I feel even more awkward and self-conscious when I actually hang out with Koreans who are speaking Korean. It is difficult to describe. My Korean has improved substantially since I married a Korean international student and moved to Flushing, so I actually understand a good portion of conversations in Korean. I think some of my discomfort stems from not fully grasping the nuances of jokes, slang, Korean idioms, or subtle cultural aspects of Korean ways of interacting. While the age hierarchy, honorifics, and drinking etiquette are ingrained in Korean Koreans (which is how I refer to people who were born and raised in Korea and speak Korean as their first language), those things are not second nature to me. While I do not feel completely comfortable interacting with a group of Koreans who are speaking Korean quickly and rattling off jokes and stories, I do feel some sense of solidarity and even affection when seeing or encountering strangers that I recognize as Korean. I am not sure if this qualifies as jeong (a Korean word for the compound of affection and sympathy). In all honesty, the concept of jeong is still somewhat new to me since I did not grow up in Korean society and I just learned the term a few years ago. Since I was born and raised in the U.S., my tastes, mannerisms, and mentality are distinctly American, and I feel comfortable with American customs. However, I also feel that many people do not accept me as fully American because of my Asian features and ancestry. To borrow a term from the scholar Mia Tuan, Asians in the U.S. are seen as “forever foreign”. I am a stranger in my own country, the land where I was born. On the other hand, when I am surrounded by other Koreans, I feel as if I will never be fully accepted as Korean because I am too American. I am also a stranger in my ancestral homeland, the country of my parents and their parents. As a result, over the years, I have cultivated a fluid and hybrid identity as a survival mechanism. I have become accustomed to living in liminality, and I think back to my teenage years when I discovered punk rock and learned that I did not have to blindly accept labels or identities that others imposed on me. I am okay with being a stranger. 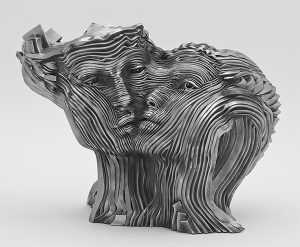