I’m officially a month into being a full-time faculty member at SUNY New Paltz, and couldn’t be happier about my new job so far. Everyone has been welcoming and warm, and I instantly felt at home here. My colleagues are hardworking, supportive, and brilliant, and my students are inquisitive and enthusiastic. And have I mentioned the facility!? Old Main, the building where the School of Education is housed, is the oldest building on campus. It recently underwent a renovation, and although the original stairs and beautiful stain-glass windows were preserved, the interior was completely rebuilt. Each classroom is furnished with smartboards, projectors, and document cameras that, from a pedagogical perspective, make interactive teaching with digital components a seamless possibility.

There have been many moments during the last two weeks when I’ve reached for my phone to call Jean Anyon. Despite my happiness over my new position, I have had a perpetual lump in my throat. I miss her terribly. As I expressed in my last post, she was more than a mentor and professor to me and so many others — she provided both professional and personal guidance, and it’s hard to adjust to life without her being an email, text, or phone call away.

She would have wanted to know that I went to the first meeting of our union, United University Professionals (UUP). I was grateful for the opportunity to find out more about the UUP, but the feeling of disappointment in the room about the last contract was palpable. From an important question about family/maternity leave (or lack thereof) to a report on plans to organize for a future contract in order to prevent further givebacks, it quickly became clear that we need to build more local support from the rank and file. 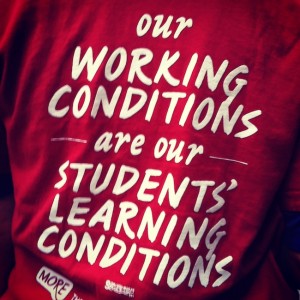 Last week, I received a t-shirt from the Movement of Rank and File Educators (MORE), a caucus of the United Federation Teachers (UFT), in the mail. It seemed like a timely, and necessary, reminder of the work that can be done when workers come together. Although everyone at New Paltz seems very happy to be here, the one thing they often — and openly — vocalize is that they’re not in it for the money. While I agree that education as a career path isn’t always lucrative, I was shocked to find out a year ago when I went on the academic job market that university professors in education make as little as they do.

Doctoral students who are wrapping up their dissertations now are curious, and understandably so, about what they’re facing in terms of salary. After doing some calculations, I realized I’m making less than I was as a 5th-grade teacher seven years ago (in comparison, other universities where I interviewed weren’t offering much more). While context matters to some extent, the facts are clear: the cost of living is going up steadily everywhere, and teachers at every level remain underpaid. When I did a little research online to see what professors in other departments make, I found that business professors at the same level — with the same education as me — make tens of thousands of dollars more. Put simply, that just doesn’t seem right.

When I was an active member of the UFT, I signed on to several caucuses at various points that were fighting to protect members’ rights. At the time, we were lucky if five or ten people showed up to meetings. At a MORE meeting I went to this summer — in July, mind you, when most teachers are taking a well-deserved break — there weren’t enough seats for everyone who showed up. I walked away feeling energized by the reminder that when enough voices come together, people really do start to listen.

It reminded me of the time, many years ago now, when Randi Weingarten (the then-UFT president) called on me in the Delegate Assembly to speak. I turned around to address the largest audience I’ve ever spoken in front of, and started out, “Hi. I’m a teacher, and I’m tired.” The room erupted in supportive applause and shouts, and I knew immediately that our resolution — of which I don’t recall the exact details now — would garner support from members. We’d been working without a contract for several years, and the rank and file was tired of being ignored.

I have a lot on my plate to balance the demands of my new job, and fully intend to do whatever I can to successfully juggle the expectations of teaching, scholarship, and service that come with my new position. However, as I await the arrival of my first paycheck, I can’t help but wonder about how we’ve gotten to a place where 1) we feel lucky if we have healthcare; 2) managing debt (as opposed to being able to pay it off) is the norm; 3) teaching, despite it being one of the most important jobs according to public discourse, continues to be such a low-paying profession; and 4) unions have somehow been painted as an obstacle instead of a vehicle. I worry about our future, America, but hold out hope that it’s not too late to fight for what we deserve.