*Title of post a nod to Craig Steven Wilder’s Ebony and Ivy: Race, Slavery, and the Troubled History of American’s Universities 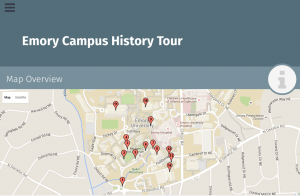 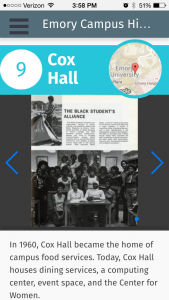 The tour uses materials from the Emory University Archives to highlight histories of various sites on campus. Writing the stops led me to learn more about Emory’s history soon after I arrived on campus. I was particularly interested in learning about the presence of African Americans in Emory’s history. Mark Auslander’s “The Other Side of Paradise: Glimpsing Slavery in the University’s Utopian Landscapes” offered a rich account of the history of enslaved black people and the legacy of slavery on Emory’s original campus in Oxford, Georgia. The 2011 conference on Slavery and the University also provided insight. The Emory University Archives materials on desegregation and black students’ organizing efforts proved invaluable in illustrating this history.

Many of the stops I worked on warranted discussion of either the legacy of slavery and segregation, or black student organizing. The Haygood Hopkins Gate is named for two Emory presidents, one of whom was a slave-owner who had a change of heart, renounced the institution of slavery, and gave a speech of Thanksgiving in praise of abolition. Haygood’s speech prompted a Methodist in Brooklyn to make a significant donation that made the university financially stable. Haygood also went on to work for the John F. Slater Fund for Negro Education in the South.

Carlos Hall, formerly known as the Law School building, and Bowden Hall have ties to efforts for racial integration at Emory. In 1962 (!), Ben F. Johnson Jr., the dean of Emory Law School, and Henry Bowden, represented Emory in the successful Emory v. Nash at the Georgia Supreme Court. Emory sued to allow private institutions to retain tax-exempt status while admitting African American students, in effect allowing for the racial integration of private colleges in Georgia.

Seven years later, in 1969, the Black Students’ Alliance led an extensive protest calling for better conditions for black workers on campus, the hiring of a black administrator, and the establishing of spaces for black students on campus. The Cox Hall tour stop includes information and images from the protest. 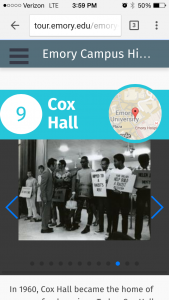 “Hipped to a Racist’s Ass,” Sign at a Boycott of Cox Hall 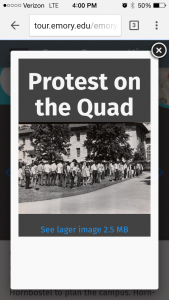 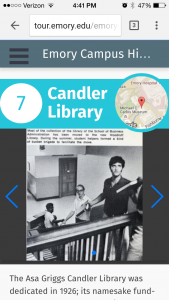 Tours like Black at Bryn Mawr and Black and Blue at UNC, provide a model for how we can draw attention to the spatial legacies and experiences of African American students and workers in institutions of higher education.

I have also been viewing from afar (via the hashtag #NewTourJNBC) the New Tour: Innovations in Place-Based Storytelling conference at Brown this week. A smattering of questions and examples that caught my attention:

Who does the mobile tour empower? Tourist? Who gets to say no? Who is audience? What do locals get? #newtourjnbc

How many digital tours / apps allow transformative use / downloads of data? Seems like there's lots of potential there. #NewTourJNBC

Mobile platforms can lower the barrier to entry, foster agency–is this how we make participants of the public? #amst2650 #NewTourJNBC

I'm hearing a lot about "audiences" but not a lot about "publics" – is this a significant distinction for tours? #amst2650 #newtourjnbc

@beahlurgin in fact I may have the opposite worry, that "public" is general and may cover for a lack of design rigor #NewTourJNBC

http://t.co/l98zeQ7WlO has me thinking: how can we create tours for invisible landscapes? #NewTourJNBC

Cool. @laurbanrangers take people on tours of the LA river and let them taste water from different parts of city. #newtourjnbc