I knew when I started this blog that it was going to be a challenge to keep up once the school year started–yikes, where does time go!?  It’s been a whirlwind of a week, and culminated in going to the Occupy Wall Street protest yesterday afternoon.

I have been to many protests, but few that were quite like this.  People were everywhere.  Some say it was because of the Radiohead rumor, but I can’t agree.  Things are bad.  People are angry.  Economic and political discontent is mounting, and along with thousands of other people, I’m ready to see something different happen.  I don’t want to argue anymore with people who think things could be worse.  Shouldn’t we try and aim a little higher?  Shouldn’t we be upset that poverty, homelessness, and joblessness are worse than they’ve ever been in our lifetime, rather than worry that things will get worse if we speak out?  Isn’t that just admitting that the wrong people control the policies that affect us?

People who know me well know I used to organize with the ISO (International Socialist Organization), and for a long while, would get up every Saturday morning and make signs for our hour-long paper sales during which we stood on street corners, talked to people about what was going on, and sold papers for a dollar.  I learned so much during this time about the history of the left, protest, labor rights, unions, the working class, etc., but I also struggled inwardly with putting the ideas into practice when we met opposition from other groups on the left.  I couldn’t understand why there was so much in-fighting between these relatively tiny groups, and why people in other groups would argue so vehemently about the intricacies of how a revolution would happen in the United States rather than focus on what is happening.  Wouldn’t the point be to decide what we want to have happen, together?  While my comrades in the ISO would listen to my questions and try and really understand where I was coming from, people in other groups would completely shut me down and shove their ideology down my throat with words I didn’t understand before I could even get my ideas together.  But yesterday, I didn’t experience this familiar divisiveness; we were all there for the same reason–change. 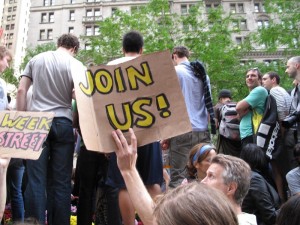 My point being: I’m grateful for the time I spent organizing, and everything that I learned, and my lip even quivered a little with nostalgia as I gathered up my foam core and markers to make myself a sign for the afternoon action.  I was flooded with memories of exhausting-but-invigorating days spent preparing for and traveling to protests that left me feeling like part of a community that stands on the right (er, left!) side of history.

I don’t know about you, but I was never taught about the history or power of protest as something I could participate in.  The history I learned felt episodic–like all of these events in the 60s and 70s were disconnected moments on a timeline that had nothing to do with each other.  I was shocked to learn as an adult that in fact, the history of labor organizing is long, involved, and anything but disconnected.  So many people I talk to think that real change is going to happen by electing someone through our current, fairly undemocratic, two-party system; however, when you look back, actual change that benefits ordinary, working-class people–even when legislated–happened as a result of a movement with people taking to the streets.  (For the record: I’m not saying don’t vote–you have every right to exercise that right if you choose!  And I was proud to vote for the first African-American president in 2008.  I’m just saying that thinking outside of the box might be increasingly necessary and voting for someone you’re not 100% behind because they’re the best option seems pretty counterintuitive to me.)

Lower Manhattan felt electric last night, and I’m suddenly as excited about getting back out there as I was during the 2004 RNC.  As we marched through the arch of City Hall, the goosebumps rose on my arms. Seeing a growing number of Facebook updates, tweets and blog posts of friends and colleagues who have joined the movement in the last few days makes me think those goosebumps aren’t going away anytime soon.  I can’t go back today, but will tomorrow.  Solidarity!

You can see the full album of photos I took here:

CUNY announces it will seek funding for adjunct healthcare