Dyan Elliott is Peter B. Ritzma Professor of the Humanities in the Department of History at Northwestern University. She is the author of Fallen Bodies: Pollution, Sexuality, and Demonology in the Middle Ages, also available from the University of Pennsylvania Press.

The early Christian writer Tertullian first applied the epithet “bride of Christ” to the uppity virgins of Carthage as a means of enforcing female obedience. Henceforth, the virgin as Christ’s spouse was expected to manifest matronly modesty and due submission, hobbling virginity’s ancient capacity to destabilize gender roles. In the early Middle Ages, the focus on virginity and the attendant anxiety over its possible loss reinforced the emphasis on claustration in female religious communities, while also profoundly disparaging the nonvirginal members of a given community.

With the rising importance of intentionality in determining a person’s spiritual profile in the high Middle Ages, the title of bride could be applied and appropriated to laywomen who were nonvirgins as well. Such instances of democratization coincided with the rise of bridal mysticism and a progressive somatization of female spirituality. These factors helped cultivate an increasingly literal and eroticized discourse: women began to undergo mystical enactments of their union with Christ, including ecstatic consummations and vivid phantom pregnancies. Female mystics also became increasingly intimate with their confessors and other clerical confidants, who were sometimes represented as stand-ins for the celestial bridegroom. The dramatic merging of the spiritual and physical in female expressions of religiosity made church authorities fearful, an anxiety that would coalesce around the figure of the witch and her carnal induction into the Sabbath. 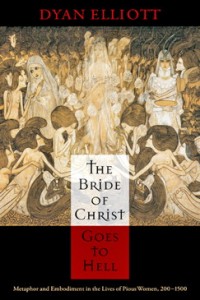 Professor Mahmood’s work focuses on the interchange between religious and secular politics in postcolonial societies with special attention to issues of embodiment, cultural hermeneutics, law, and gender/sexuality.  Her work is best known for its interrogation of liberal assumptions about the proper boundary between ethics and politics, freedom and unfreedom, the religious and the secular, and agency and submission. She is the author of The Politics of Piety (2nd edition, 2011) and, with Talal Assad, Wendy Brown, and Judith Butler, Is Critique Secular? Blasphemy, Injury, and Free Speech (2009)

Taking its cue from Eve Sedgwick, this talk offers a “reparative reading” of the ongoing struggle over the publication of cartoons of the Prophet Muhammed in Europe. Rather than read these debates as a standoff between religious taboos and secular freedoms, Mahmood unpacks the distinct epistemological and interpretive stakes at the heart of such conflicts. 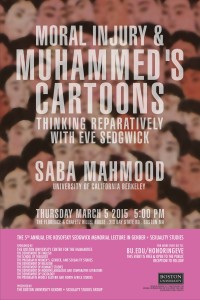 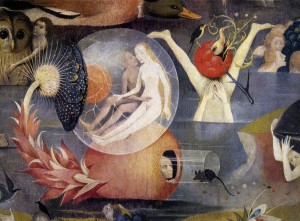 The Sacred in Every day life, Michel Leiris

‘WHAT DOES MYSTICISM HAVE TO DO WITH SOCIAL JUSTICE?’

‘Luce lrigaray and the Advent of the Divine: From the Metaphysical to the Symbolic to the Eschatological’