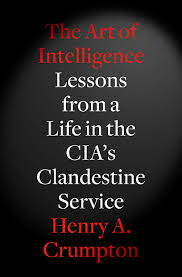 David Firester’s Book Review of Crumpton, Henry A. The Art of Intelligence: Lessons from a Life in the CIA’s Clandestine Service. Penguin, 2012.

The allure of Hank Crumpton’s book, for the layperson, is probably that it’s an eye-opening journey through the seemingly secretive intelligence world.  To the student of intelligence, however, it is both a cautionary tale and a road map that indicates what sorts of obstacles may lay ahead.  The book’s title tells us much of what we need to know about its contents.  First, the notion of an “art” of intelligence is, as Crumpton mentions, a conjoining of concepts laid out by two of history’s great thinkers: Allen Welsh Dulles and Sun Tzu (13).  The former was a more contemporary American intelligence leader and the latter was an ancient Chinese military theoretician.  Both of their works continue to be used today, as a tool for thinking about strategy and tactics.

The second portion of the title that Crumpton has crafted has to do with the “lessons” he has drawn from his own experience.  Throughout the book, one can see that the key to success is learning the right lessons and applying them accordingly to the changing threat landscape, not one’s preordained sense of what it should, did, or might look like.  Some would call this adaptation, which is precisely the process that he, and the Intelligence Community (IC), had to go through.  There were, of course, mistakes to be made.  The important point to remember, however, is that an individual or organization learns from them and improves themselves.

Building on the two themes, outlined above, I will review some of the vital insights that Mr. Crumpton has elucidated.  I’ll try to blend the lessons he learned, with an eye toward those that we might learn.

With regard to the practice of intelligence as an art, there is a theme that regularly revolves around the various non-state actors (311) and their contribution to both the threat milieu and their ability to stifle such threats, if properly coopted.  In the first instance, there are transnational terrorist and/or criminal organizations and resource bases, some human and some technological, which they count on to support their local, regional, or global operations.  Asymmetry isn’t merely a description of the local insurgent/incumbent battlespace.  It’s a condition that has global implications (323).  Much of this discussion is synthesized quite eloquently by the author between pages 279 and 282.

In the second instance, these same resources are the very ones we should seek to undermine, exploit, or otherwise induce to our advantage.  In other words, our enemies’ key infrastructure can be embraced and repurposed for what, in our view, is the good side in the fight (293).  To this end, Crumpton discusses the contributions that many unsung private sector partners have made.  He should know.  He was the head of CIA’s National Resources (NR) Division for a couple years.  This specific clandestine interplay, between the public and private sector, is not typically the focus of popular literature.

Another artful description of the intelligence practice, which is a good segue to the next topic under review, is summarized on page 301.  “In the intelligence business, often there are only partial answers and limited or unknown results.  An intelligence officer’s professional challenge, among many others, is living with incomplete results.  The painting is never finished.  There is always something to add, something unknown, something that changes.”  Although this analogy isn’t necessarily new, it might serve us well to remember it in our daily lives.

Adaptation is an essential ingredient for a successful intelligence enterprise, which necessarily serves policy ends.  Throughout the book, however, Hank Crumpton reveals the elements that hinder, or facilitate the requisite changes that need to be made.  In terms of hindrances, he discusses the interagency difficulties that he experienced, some of which had to do with the essence of another agency’s focus and mission; e.g., FBI, or the Air Force.  Others, however, were rooted in the personalities of individual policy makers; e.g., Paul Wolfowitz.  Still other obstacles came in the form of rigidity of thought by key leaders within the military; e.g., General Tommy Franks, or Secretary of Defense Donald Rumsfeld.

Perhaps the key statement on adaptation, which Crumpton makes in passing on page 58, deserves amplification.  In talking about his recruitment abilities, he went on to state, “I adapted through constant experimentation – with a wealth of failures along the way.  I studied my failures and quietly celebrated my successes.”  The reason this is such an important insight is that it is an expression of humility, the key characteristic that seems to have been lacking in each of the individuals and organizations he cited as hindering adaptation.  What is perhaps more striking about such a remark is that whether the reader is a layperson, an intelligence professional, a businessperson, or even a parent, we should heed the notion that we are not infallible.  Further, what sort of introspection do we conduct on a regular, or even an occasional, basis?

Another point that Crumpton makes in a variety of ways, is that when policy failures may have been made, it is those who have contributed to them in the first place that so brazenly point the finger in the direction of the intelligence community (5, 310).  It’s convenient and safe for politicians to do so.  There is no incentive to look inwardly for answers to perceived failures.  This is probably a natural phenomenon and one that attends most humans’ psychological composition.

Although some academics (310), and members of the media (114), typically scrutinize the IC, Crumpton reminds us that they don’t necessarily have the tactical experience, nor the professional training to make sense of the world into which they are peering.  (He does mention some academics who get it right, on pages 124 & 277-78.)  This point should resonate with many readers, who are experts in their field and are relentlessly second-guessed by laypersons.  It is even more painful when outsiders, misguided by their own lack of expertise, engage in provocative conjecture, or intentionally fabricate a story that, due to secrecy considerations, can’t be fully challenged in the public realm.

If, somehow a reader comes away thinking that Hank Crumpton is writing from a partisan standpoint, it would serve them well to re-read sections of the book that point to three separate administrations’ misperceptions of the threats that were clearly highlighted by the IC.  The Clinton administration, according to the author, suffered from a sort of impotence with regard to international terrorism (111, 130).  Further, the author asserts that an inadequate response to threats was fueled, in part, by political considerations (155, 166).  His assessment of the Bush administration that followed was that its attention was sometimes misdirected (166-67), particularly the attention of key members in the policy community (188, 239).  He specifically states, “Policy makers were seeking to drive intelligence conclusions rather than letting intelligence collection and analysis inform policy.”  Regarding the Obama administration, he notes their effort to destroy CIA members’ lives because they disagreed with the legality of their prior actions, despite their lawful quality at the time in which they carried out their duties (6, 125).

Conclusion: Learning from Others’ Insights

Although there are many other interesting details in the book, such as North Korean diplomats’ obsessions with pornography (45), one of the key points was how the intelligence process served the interest of national security, which often went underappreciated.  Central to success in this regard was the provision of incentives and rewards to assets, whose accounts could be corroborated.  My own assessment of his point about tailoring support to allies on the ground, by way of specific air drops, makes me think of it as a form of counterinsurgency by proxy.

Speaking truthfully to superiors, taking risks, thinking outside the proverbial box, vigorously pursuing leads and capitalizing on them when they panned out served the interests of proper adaptation.  Another element for success consisted of the occasional need to outmaneuver bureaucratic recalcitrance, by forging alliances with policy makers who were cognizant of the implications that phlegmatic thinking had on national security.

For detailing his own learning process, Henry A. Crumpton’s book is essential reading for students of psychology, bureaucratic politics, military strategy and intelligence studies.  I also recommend it for those who may tend to look askance at the IC, so long as their eyes are open and their minds yearn to gain what their instincts might otherwise lead them to avert.

David Firester specializes in intelligence analysis and is founder of TRAC Intelligence.

Welcome to The OpenCUNY Academic Medium. This is your first post – Edit or delete it, then start blogging!

Watch some brief video tutorials to help get you started! Learn about more basic tips for your site and information about OpenCUNY.

Any questions or comments? Don’t hesitate to be in touch with the OpenCUNY Coordinators!

Some firms have the budget to benefit from their own organic intelligence teams.  Others, however, do not.  Wouldn’t it be nice for your firm to benefit from the wisdom, expertise, and practical experience of an analyst who can provide you with an enhanced picture of the world in which you must make significant and impactful decisions?  That is where we come in.   TRAC Intelligence, LLC.