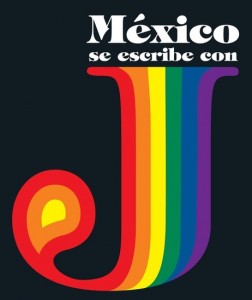 Some of my favorite insights from this write up are the following:

“The way in which kitsch blurs the borders between low and high is recycled with a camp gesture by artists and writers, for the purpose of cannibalizing the straight male dominant culture, and deal with a hostile environment today, rebelling against victimization. The parody of camp and the sentimental excess of kitsch aesthetics, uncover the weaknesses of masculinity, radicalizing in the process gay culture in Latin America.”

“To denounce, to caricaturize and expose masculinity, which the straight man has erected as a barrier to protect his dependencies, uncertainties and fears, through kitsch but without losing the ingenuousness and pleasure of camp, become therefore powerful tools in the process of fighting prejudices and homophobia, and of normalizing in the long run the gay collective all over Latin America.”

According to Varderi the book México se escribe con J is an intervention that challenges an intractable masculinism and provides a fresh and contemporary look at gay Mexican life.