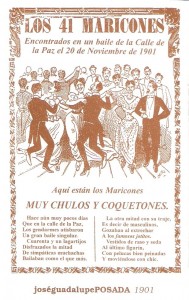 One cannot discuss a (re)queering of Mexican history without discussing the most famous case of homosexual discrimination in Mexican history. The Famous 41 is an event that marks the beginning of modern discourses and counternarratives on male homosexuality in Mexican history. What is more, it underlines the themes and presents the narratives that accompany the fight against homophobia until this day.

The case of the Famous 41 was first unveiled by short newspaper reports on November 20, 1901. Several days later the press was buzzing with the story. 41–some say 42–men had been arrested for participating in a drag ball in the heart of Mexico City. The police raided a private party that was being held without proper permission and the participants had been licked up in the Belén prison for attacks on morality (Irwin, 2003: 67). According to newspaper reports when the police arrived they discovered a fancy party with men dressed as women dancing with other men in suits. Once in police custody the men in suits distanced themselves from the men in gowns alleging that they had been fooled since they had received invitations to a party with women.

The case caused a moral uproar in the national press and curious excitement in the population. Newspapers continued to meet the needs of readers whose curiosity interested them in every aspect of the night’s events. The ball gowns were of special interest to reporters as well as the occupations of the men present. All details were discussed and liberal and conservative newspapers alike piled on the moral indictments on the men in drag. The government eventually deported them to the plantations in Yucatan, thus officially criminalizing homosexuality in modern Mexican history.

The case of the Famous 41 fits within a metanarrative of queer history. Five years before the case of Oscar Wilde had shaken European society and it was still fresh on the memories of Mexicans, especially the elites. With greater freedom and socialization in urban center men in Mexico, like men in the capitalist world, met in cafes, bathhouses and gymnasiums. What also unites this story the metanarratives of queerness is the criminalization of homosexuality.

The case is still part of the popular homophobic imagination in Mexico today is the short video below illustrates: 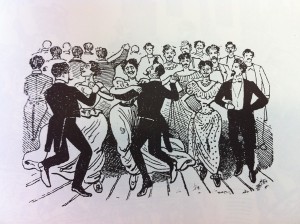 For an insightful account and detailed treatment of the case of the Famous 41 see chapter two in Robert McKee Irwin’s Mexican Masculinities (2003) from the University of Minnesota Press.