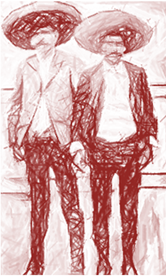 The following anecdote takes place in 1913 at the height of the military campaigns of the Northern Division. John Reed had come to Mexico as a reporter on assignment for several American newspapers. While in Mexico Reed traveled throughout the north and became friends with many men in the field of battle.  Sometimes, the lines blurred between friends and comrades…

Soldiers sleeping together is nothing out of the ordinary… However, when Reed takes to sleeping with Longinos Güereca, things go a bit further:

He sat down…, smiled his homey gentle smile, and took both my hands in his.

“We shall be compadres, eh?” said Longinos Güereca, “We shall sleep in the same blankets, and always be together. And when we get to the Cadena I shall take you to my home, and my father shall make you my brother….”

And from that time on until the end, Longinos Güereca and I were always together.

From Mexican Masculinities (2003) by Robert McKee Irwin and Insurgent Mexico (1969) by John Reed.