This story was inspired by John Reed’s accounts of his time in Mexico where he spent several months reporting to Metropolitan magazine. He was in the north of the country in 1913-1914. In his book Insurgent Mexico he recounts some of the most important battles of the revolution then sweeping the country. This vignette is specifically inspired by his sections “On to Torreon!” and the Army at Yermo and should be thought of as an accompaniment to those stories. 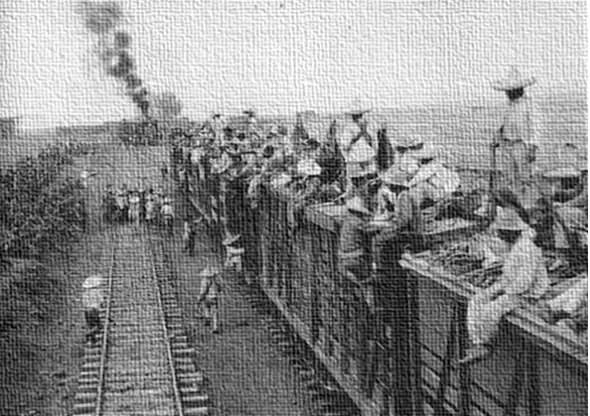 There we stood Demetrio, Cruz and me, huddling over a fire next to car number 36. It was April and out here you couldn’t stand the cold dessert morning without a fire. We were waiting for orders to advance since midnight but the sun was about to rise and the generals still hadn’t received word from the front. Most of the nurses and doctors in car number 36 were already awake tending to the wounded and cleaning bandages in boiling water. Along the stretch of desert in the horizon one could see the smoke rising from small fires where others camped overnight with their horses and mules. We stood there waiting, in silence, not wanting to speak since we had already covered the important details; when did you join the guerrilla? Why did you choose to fight? What did you do before the revolution came to your village? So we smoked instead, sharing a cigarette between the three of us, Ignacio smoking more than his fair share of puffs.

In the distance one could see golden rays of sun blasting through a small patch of clouds lingering innocently in the sky. We could make out the lavender hued mountains of the sierra, stretching as far as the eye could see south towards the front. Little by little the masses of people in the hundreds, maybe thousands, were becoming impatient and moved around their fires, getting ready for anything. We caught a glance of the engineer’s tattered uniform hat above the crowds beside the train coming towards us. As he walked people stood up and followed him. They gathered around him when he climbed the stairs of the car in front of ours. We all stood in silence as he read out loud the telegraph in hand. I couldn’t make out everything since I was still learning Spanish, but I caught the words, ‘government army’ and ‘destroyed tracks.’

From talking to others I learned that a small detachment of government troops had slipped behind our lines during the night and destroyed several miles of track and bridges with dynamite near the pueblo of Jimenez, about five hours ahead of us. The explosions gave them away and most of them had been captured and some had been shot by our cavalry. However, the government army hadn’t made any advances and we were safe here for now. It was clear that it would take almost half a day to repair the tracks and we might even spend the whole day here once again. Soon enough we each went our separate way walking around the fires tended by women, looking for food. It was days like these when I thought about home the most. I hadn’t eaten since last night and I was really craving a bowl of clam chowder.

At about noon Cruz and I were resting under the car avoiding the sun as much as possible. Looking into the wood detail I noticed the logo of the Texas and Pacific Railroad. Cruz also noticed it and helped me to dust it off. He told me he had worked on the Pacific Railroad because they paid more than the cattle ranch he worked for Sonora. But after a few years of working on different lines in the north of the Mexico he couldn’t find work and had returned to work in cattle ranching, this time in Chihuahua. He said that it was there where he had met Patricio the youngest son of the hacienda San Jacinto.

Cruz was different from other men. Here in Mexico he would have been referred to as a maricon back home a pansy or a fairy. Yet he did not behave like the men from the cabarets. He was a rugged individual with a sun-scorched face. His hands were callous from cattle ranching and he possessed a noble heart. At the hacienda San Jacinto he had met Patricio the youngest of Don Dionisio’s sons. A slender and fair young man ten years his junior. At first Cruz didn’t think much of their friendship but in time he began to feel “something” for Don Dionisio’s son.

When he first arrived at the hacienda Cruz worked cleaning the stables, branding cattle, and breaking in horses. He was known as one of the best riders of San Jacinto. Don Dionisio wanted his son to learn how to ride like Cruz and every day Patricio was sent to the stables to tend to the horses and to learn from Cruz. According to Cruz at first Patricio was very shy but over time they became friends and he learned how to ride, much to the joy of his father. At San Jacinto Cruz didn’t socialize with the senoritas and instead he preferred to ride off into the prairies with Patricio.

Cruz and Patricio began to spend every day together. When Patricio wouldn’t come Cruz would go looking for him to ride. He would look for any excuse to procure his company and Patricio would do the same. Cruz said that when he didn’t see him he would feel empty, like he was missing something, as if he had a bullet hole in the middle of his chest. He said that Patricio’s lips tasted like a sweet peach with honey.

When the revolution broke out Don Dionisio decided to send his family with his relatives in Torreon where it was safest. Patricio was sent with them even though he offered to stay with his father but Don Dionisio refused. At the height of the conflict his hacienda was repossessed and he was killed in the first raids. He owed many favors and he had allied himself with the wrong people. Well, the ones that were losing. Cruz left the hacienda because he didn’t want any problems but when heard that the revolution was heading south to take the city of Torreon from the federal army he joined the Zaragoza brigade. His hope was to reach Torreon and to look for Patricio. To protect him from the fighting he said.

But that was at least two days away and at our pace it could take a week.

The sun had reached the zenith of the sky and the heat wave sweeping the camps forced everyone to find shelter and sleep or sit still. We could see mirage induced lakes toward the eastern sierra. Thinking back on the history of this country, it too seemed like a mirage. How unbelievable it all seemed now that after thirty years of industrialization the rail network was now crumbling under four years of revolutionary upheaval. Even more unbelievable were the people carrying out this revolution; the peasants, the women, the guerillas and their leaders.

At this point my delirious imagination was interrupted by the sound of Demetrio’s spurs. Cruz and I took off the soaked handkerchiefs from our foreheads and looked up from under the car. He had a pack of cigarettes in one hand and a small bottle of aguardiente in the other. He had just won them in a protracted game of Paco against two engineers. Besides horse riding, Ignacio was also a lucky gambler. We were lucky to be his friends.