The Man in the Black Suit

The following is a vignette inspired and modeled on the letter by Edwin Lyon Dean to his parents on September 22, 1882. Lyon Dean was a train dispatcher and telegraph operator for the Central Mexican Railroad in 1880. On September 15, 1882 the railroad between Ciudad Juárez and Chihuahua City was opened and a week of festivities was organized to celebrate the event as well as Mexican Independence Day.

For the purposes of this class project I have taken inspiration from Lyon Dean’s letter and I have recreated a series of personal journal entries by a young telegraph operator where he recounts his visit to Chihuahua City in 1882.

What an eventful day! I woke up in El Paso this morning and I am now writing from the Continental Hotel in Chihuahua City. This morning after I came in the station I got word from Mr. Nickerson that I was invited to Chihuahua with the first convoy leaving from town. I did not have time to get my things ready since we were leaving at noon and I had to come running back from the office and pack some things as soon as I could. Thankfully, I remembered to grab my journal on my way out. Mr. Nickerson had received word from Mr. Sidney Kent who told him to personally invite me on the first convoy to represent the company together with other mechanics and conductors.

We left the station at twelve noon and we rode for nine hours through the arid lands at about 30 miles per hour. The lone bushes we saw in the distance seemed like a smudge on a canvass. As far as one could see it was flat and then in the distance the mountains would rise in a half moon shape. For hours we observed this landscape until we arrived at the Robles Creek. The flow of water means the mountains are still carrying water which will be good for the cattle ranches we encountered along the way. After that we were treated to prairies and valleys but not much else. Along the way though, we saw a beautiful sunset that made the steppes seem like golden stacks of plates on top of each other. Truly a sight to behold.

It wasn’t until after an hour of riding in the dark that we could see the city of Chihuahua appear in the distance like a castle of light in the middle of darkness. It shone bright like a fairy city and as we approached the church spires appeared as the crowning beacon of light for the whole city. A marvelous experience after riding without a man-made structure for miles. Upon arrival our convoy entered the city towards the center and we were received with excitement by the Mexicans and Americans who were at the foot of the pavilion erected close to the train. A brass band was playing and the fireworks went off nearby causing a clamor in the crowds. We all gathered around the stage and after several speeches by the State Governor Terrazas and a few words from the investors from Boston we were taken to our hotel. After a long day on the road I am ready for a good night’s sleep. Since we will be getting up early tomorrow to partake in the festivities.

Our second day here was full of meals and the Independence ball left a particular impression on me. As soon as I woke I went downstairs to the café in the lobby and spoke with Mr. Nickerson. I was to proceed to the telegraph post at the railroad station to meet with the local telegraphist in charge of our line to wire to Boston to report on the safe arrival of their convoy. As soon as I was finished with that task I returned for breakfast and the Mexican Central crew was already waiting for me. After breakfast a few of us went to the town square to walk about to see the sights. Chihuahua City is much bigger than Ciudad Juarez. Its church is very old and it must have cost a fortune. It is said that it was paid for by the mining taxes of the region Chihuahua being a mining center in the north of this country.

After lunch we took a siesta in the hotel. It is much too hot to do anything until the sun goes down. But by dinner time the whole town is out and about. The women here wear the finest dress, comparable to that of El Paso or Chicago. Here the men wear coats in the American style and others wear traditional cowboy dress with intricate embroidery along the length of the suits that are separated in pants and jackets with a large matching hat to go with the whole outfit. The men looked truly beautiful as they rode with their horses in groups of three or four.

At tonight’s Independence ball the whole town was out in the central square. After a speech celebrating Mexican Independence the whole crowd—even Americans—began to shout Viva Mexico! We were treated to more fireworks. The suits of the men sparkled brightly as if they were wearing gems on their body. Once the fireworks were done there was music coming from each corner of the square. Couples began to dance in groups. What a truly beautiful evening… Across from my bench I could see several men gathered in the opposite side of the street with their horses nearby. One of them stood out in particular. He wore a suit in the traditional style all in black with silver patterns throughout the pants and jacket. Oddly enough I did not see him dancing like most other men, although he was surely drinking. He seemed to be enjoying the festivities none the less. His big grinning face was visible from where I stood. Later in the evening he broke into song accompanying the band closest to him. These fellows sure know how to have a good time. I wanted to stay longer to see the whole performance but it was late and I did not want to stay alone so I returned to our hotel with two of our engineers, Joseph and Albert—both from El Paso.

I can still hear music coming from the square… 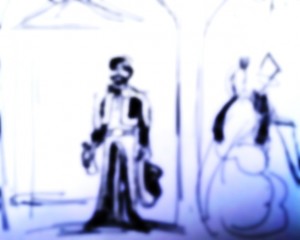 Yesterday was a busy day as I was sent to the telegraphs office at the station to continue training the local telegraphist, Mr. Brown. I was there the whole day and I did not come home until late. Today I went there for the first half of the day and met Mr. Nickerson and his wife for dinner at the Cosmopolitan Café, a local establishment with ornate interiors and modern facilities. It seems to be a place frequented by foreigners and local businessmen.

After dinner we were greeted by the mayor, a certain Mr. Creel who was well dressed in European style. He rode with an entourage of men. To my surprise the man in the black suit from the ball was with them and Mr. Creel invited us to his hacienda in the outskirts of town. He said that Mr. Nickerson and I could enjoy a ride on horse in the environs of his estate. He pointed to the man in the black suit and referred to him as Ignacio Fierro and said that he could be our guide. I could not hear everything he said but he mentioned a watering hole with crystalline water…

I am sure that this is an invitation to convince Mr. Nickerson to become his business partner. After all, Mr. Nickerson is interested in investing now that the railroad has made it to Chihuahua City. I look forward to tomorrow’s visit to the hacienda. I am curious to meet Mr. Fierro. From what I have observed he is a capable rider. It would be delightful to ride in the country with him.

I awoke to the most unpleasant surprise this morning. Before I was out of my hotel room I received a visit from Mr. Clark telling me that Mr. Nickerson wanted me to meet him at the station as soon as possible because I was returning to El Paso. I rushed over there as fast as I could and I was instructed to return here because the office had fallen into disarray during our absence. The crew that said behind was incapable of dispatching the trains heading to Santa Fe. What is more, the Tucson lines had broken down.

I returned on the first train leaving from Chihuahua City. What a disappointment. I was looking forward to our visit to the hacienda. Mr. Nickerson stayed behind but almost our entire crew had to return to our posts… After several hours on the train we had to come directly to the office… It has been a long day… what a beautiful day it would have been to visit the watering hole and to ride the premises with Mr. Fierro… Alas it could not be… perhaps Mr. Nickerson will return to Chihuahua City if he does decide to make business with Mr. Creel… perhaps I can join him to visit the beautiful city of Chihuahua… Perhaps I can see Mr. Fierro again…

The original letter that inspired this fictional account can be found with the following reference: