Seminar participants are working with a growing list of collaborators, including community organizations, artists, activists and others.

Danspace Project has supported a vital community of contemporary dance artists for over three decades in an environment unlike any other in the United States. Located in the historic St. Mark’s Church in-the-Bowery, Danspace shares its facility with the Church, The Poetry Project, and New York Theatre Ballet. Danspace Project’s Commissioning Initiative has commissioned over 450 new works since its inception in 1994. Calendar and Tickets

Happy Birthday, Marsha! is a film about legendary transgender artist and activist, Marsha “Pay it No Mind” Johnson and her life in the hours before the 1969 Stonewall Riots in New York City. Donate Here 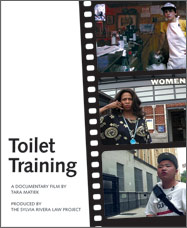 Toilet Training is a documentary video and collaboration between transgender videomaker Tara Mateik and the Sylvia Rivera Law Project, an organization dedicated to ending poverty and gender identity discrimination

Conversations in Black Freedom Studies is a monthly series — which takes place on the first Thursday of each month from 6-8 — to bring new scholarship on black history and black freedom struggles to the public and to create a sustained space for learning and conversation.

Damayan Migrant Workers Association  is a grassroots organization based in New York and New Jersey of and for Filipino im/migrant workers and led by Filipino women domestic workers. Their mission is to educate, organize and mobilize low wage Filipino workers to fight for their labor, health, gender and im/migration rights; to contribute to the building of the domestic workers movement for fair labor standards, dignity and justice; and to build workers’ power and solidarity towards justice and liberation. Events

Sadie Nash Leadership Project was founded in 2001 to promote leadership and activism among young women. The program is designed to strengthen, empower, and equip young women as agents for change in their lives and in the world.  SNLP is a unique educational model that includes rigorous coursework, mentoring, as well as service, experiential, and skill learning, including community organizing and youth-designed activism projects—with after-school projects and enrichment as well as a Summer Institute.

The Aaron Burr Society is dedicated to exposing the myths of Free Markets and Free Trade while challenging the integrity of Wall Street and their corporate cronies. The Society is an absurdist, conceptual artwork operating in the public sphere, building on the revolutionary traditions of the Early Modernists, Situationalist and Fluxus movements. They are rewriting history and mythology from an Enlightened Progressive perspective. However, though they are absurdist in nature, they take great pride in the accuracy of the information that they present to The People. Their goal is a progressive, sustainable re-imagining of the American Dream to be achieved by promoting a renaissance of the Enlightenment: the secular humanist principles of the American and French Revolutions—the first revolutions for universal human rights.

presents contemporary art, performing arts and community media programs that reflect Brooklyn’s creativity and diversity. BRIC also provides resources to launch, nurture and showcase artists and media makers. They advance access to and understanding of arts and media by presenting free and low-cost programming, and by offering education and other public programs to people of all ages.

Deborah Fisher is an artist, administrator and entrepreneur. Fisher has worked as an arts and philanthropic advisor to Shelley and Donald Rubin, studio manager of Socrates Sculpture Park, as an educator and curriculum developer for the Brooklyn Center for the Urban Environment, and has taught studio and art appreciation classes at New York University, St. John’s University, and Nassau Community College. Fisher’s art practice seeks to understand the things we build as interconnected ecosystems and focuses on public projects. She has been commissioned for large-scale public sculptures by the Hudson Valley Center for Contemporary Art and Middlebury College’s Art in Public Places program.

Gulf Labor Coalition (GLC) and Gulf Ultra Luxury Faction (G.U.L.F.) are self-organized cultural advocacy organizations made up of artists, writers, architects, curators, and other cultural workers who are trying to ensure that worker’s rights are protected when contemporary art, precarious labor and global capital intersect. Their primary focus is with the ongoing construction of new cultural institutions on Saadiyat Island in Abu Dhabi, UAE. By calling attention to gaps between socially progressive culture and the actual production of art institutions GLC and G.U.L.F. asks: Who Builds Your Architecture?

Occupy Museums occupies museums to reclaim space for meaningful culture by and for the 99%. The group was initiated from the Occupy Wall Street Arts and Culture working Group in Liberty Park by artist Noah Fischer’s manifesto of October 19, 2011. After the first action at Museum of Modern Art, it quickly became a working group which has included many people at different times including Jolanta Gora-Witta, Max Liboroirn, Maraya Lopez, Alexandre Carvalho, Blithe Riley, Andrea Liu, Maria Byck, Ben Laude, Cari Machet, Nitasha Dhillon, Joulia Strauss, and Maureen Connor, Kenneth Pietrobono, and many others. The core members are Noah Fischer, Imani Brown, Tal Beery, and Arthur Polendo. 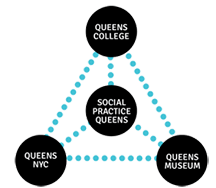 Worker’s Art Coalition created a project that addresses Labor today in Flushing Meadows Park for the Open Engagement Conference last May, on the 75th anniversary of the World’s Fair in collaboration with Migrant Camera a new initiative by Sol Aramendi’s Project Luz. The Workers Pavilion (or the Temple to Labor in homage to the intentions of the ’39 World’s Fair) was the latest iteration of an ongoing art project made with mainly union tradespeople, many of them former students at the Van Arsdale Center for Labor Studies, who have formed the Workers Art Coalition. They expect to re-create versions of the Workers Pavilion and in different venues in concert with and leading up to the International Labor Organization’s centennial in 2019.

Target Margin Theater was founded in 1991 by David Herskovits on the principle that works of art return us to real truths more powerfully by their divergence from a strict illustration of reality. Through classic and contemporary texts, Target Margin Theater seeks continuously to expand their conception of what can take place in a theater. Now in their 23rd season, they have created aggressively re-imagined versions of classics and new creations inspired by existing sources. Calendar

Words without Borders promotes cultural understanding through the translation, publication, and promotion of the finest contemporary international literature. Their publications and programs open doors for readers of English around the world to the multiplicity of viewpoints, richness of experience, and literary perspective on world events offered by writers in other languages. They seek to connect international writers to the general public, to students and educators, and to print and other media and to serve as a primary online location for a global literary conversation. Events