At the New Yorker Festival’s LGBTQ TV panel, Jill Soloway (creator of Transparent) and Jenji Kohan (best known for Weeds and OITNB) got into a heated discussion, despite the fact that, as Prachi Gupta notes, “they are two prominent women trying to do similar things.”

These “things,” are representation of diversity. Their existence paves the way for discussions about what television thinks television is supposed to do and what we want/expect television to do when we choose to watch it. What matters? Why does any of this matter?

Let me get theoretical for a moment here:

Orange is the New Black: Despite being broadcast on Netflix and available for streaming as an entire season, for the most part I would say that OITNB follows the conventions of typical “assumed viewer” identifications. The protagonist, Piper, a middle-class white woman is, despite being incarcerated, an outsider, she is someone who doesn’t “fit the profile” of either lesbian or inmate (whatever that means). As viewers we look with her at this new world, we share the freshness of this experience with her, and thus identification is not all that unlikely. Or perhaps, more in keeping with standards of tv identification, we might identify with Larry, Piper’s ex-fiance, the straight white man, dealing or not dealing, choosing a futurity that maintains the heteronormative status-quo. In his pushing away from Piper, his rejection of the prison-husband role, his bagels and brunching, he is perpetuating the invisibility and spectacularity (as in spectacle-ness) of this world. We, as viewers, we have this choice, we can stop the episode, we can turn it off, we can choose when to view, when not to, and the prison-life, the fantastical televisual prison-life will simply disappear.

Transparent: There is no way out. Any identification created with any of these characters, identification that television studies has argued is completely necessary to create viewer loyalty, for emotional realism, for maintaining audience, any identification must be with someone who at least in part exists outside what could be considered conventionally he 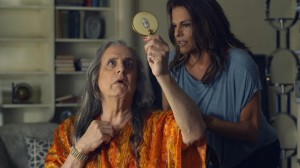 teronormative. Perhaps the brother, perhaps the child-like, resisting, straight man who lashes out against maturity, against identification, against empathy, perhaps he remains the symbol of straight whiteness, of safety in identification. But this, quite frankly, seems like a stretch, like a nod to the id.

But these shows offer alternatives, offer representations of otherwise invisible or marginalized communities. LGBTQ spectators flock to these shows, perhaps with more awareness and agency than when The L Word first came out. But we do, we want to know, we want to say yes or say no, this is not my queer. My interest here is in that yes, is in that no.

This is a call for conversation. Why? What constitutes the queerness or transness that you support? Is it about identification? Does it matter that Soloway’s story is based on her own life experience? Is it important that trans people are on staff to write for and coach the actors? Is this a necessary realism? Does it matter that Maura’s character is played by a man, does it matter if Maura is preOp or postOp when casting the actor? What are the expectations we have of television that make questions like this matter? What do we need to do or to see to say “yes, this is a queerness that I want to see”? Why do we expect television to show us reflections of ourselves?

I am wondering if fact that both these shows are available on streaming, if the fact that entire seasons are available all at once, if the elimination of the spaces between shows makes identification and emotional realism less important for spectatorship. 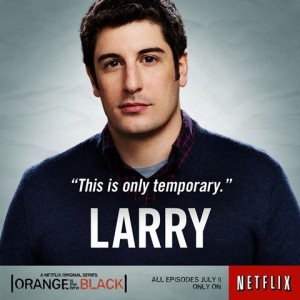 Changing the temporality of these shows changes assumptions of consumption. The binging, the exposure that does not require long-term identification, that asks for a short moment of participation, this temporality lacks commitment. And if commitment is the structure of a heteronormative futurism, perhaps it is the structure of these shows, perhaps it is our mode of consumption that might be queer. When I say, NOT MY QUEER, I still feel and need the experience of watching tv, the pleasure in eating and ingesting the content and having my way with it. Whatever and whenever, this is the queerness the content can’t give me.