I watched season 4 week 5 of RuPaul’s Drag Race (” The Snatch Game”) on Logo quite a number of weeks ago but I just can’t seem to shake it, not because I was so horrified at Milan’s Diana Ross impression (which I was…) but because I was so surprised by the limits of the show’s definition of drag. 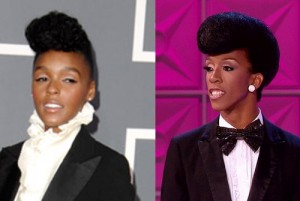 Isn’t setting such strict limits on what IS and IS NOT a drag performance as limiting as the heteronormative gender expectation that drag and other forms of queer performance/identity are supposed to subvert?

I’m inclined to believe that the reason for these limits are the same reasons why most shows about queers are successful, namely because they make the unfamiliar and strange fit into a box that makes it easier to understand. We dress this way…and gays are good at fashion and lesbians are good at wearing flannel and playing softball, unless of course you live in LA (but there was another show to understand THOSE kinds of lesbians).

Now I don’t pretend to be an expert on drag kings and queens but if my favorite drag queen FIGGY can rock it without a wig why does Milan have to wear heels? And why is it so wrong that she rip off her shirt at the end of her performance of Gaga’s Born This Way in an attempt, however cliched, to bend the gender limits of drag?