Story of this Blog

The image in the background was taken at dusk, at the intersection of Fifth Avenue and 34th Street in New York City. Looking up at the evening sky the silhouette of the Empire State building looms over and splices the cloudy blue in half, yet, standing on the sidewalk, it does not appear to overpower the person below. It is the buildings on either side of the avenue that close off the view of the sky, showing how narrow the space between rows of buildings really is, street after street, on the Manhattan grid. Oddly, looking up, the spire of the Empire State, with its cumbersome moniker, seems to stand apart, as if it were a space ship, visually providing an escape from the crowded island city floating on the Hudson. I love this view. It represents the spirit of these writings. The name Caterva (meaning throng, or horde) refers to the title of an obscure 1937 novel by an Argentinian author, Juan Filloy. 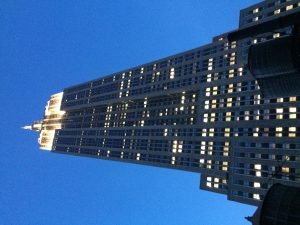 I write this blog in celebration of the urban throng I joined fully when I began my doctoral study at The Graduate Center.

For five years, from late August, 2014 until my graduation in May of 2019, I walked along these streets and stood under the shadow of these buildings, usually thinking about the books I had been reading and the papers I was writing in the Latin American, Iberian, and Latino Cultures PhD Program. I was often alone, arriving for classes or meetings with my advisor, or on my way home, heading for the 35th Street entrance of the subway at 6th Avenue, to catch the B train home, up to Harlem. But, just as often, I walked along with my colleagues in the program, my friends, who became my family and the most significant part of this course of study. We walked in a small caterva to a bar or a café, eager to discuss the most important things in the world, our ideas. As we walked, I think we knew, each in our own way, that we were only that, a small group of beings perambulating at dusk over narrow channels of concrete built over an island in the Hudson that would, soon- in cosmic time- disappear, as we would, as our ideas would, as the world would, and perhaps, because of that understanding, our bodies, the physicality of our minds, sparked with energy. 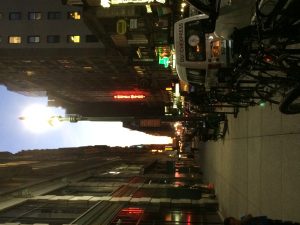 I wish I had written everyday about what we were thinking. Most of the time I was daunted by the impermanence of my thoughts, the world, the connection provided by the internet and the invisible energy of thousands of CUNY minds over the years, and I could not. I tried to write about the important events shared- were they any more important, some moments, and not others? The buildings crowded around and over us. I thought about the solidity of the people who built them and the people who inhabited and toiled in them, as we toiled on the second floor of the library and in the rest of our lives, lives of privilege for those five years. We were only there because of throngs, people, workers, tyrannical bosses, visitors, tourists, migrants, flower sellers, mothers, beggars, poor, strong, dying, in love, film stars, intellectuals, protestors, queer marchers (I had marched for years carrying Latina lesbian banners, down Fifth Avenue, every Pride march at the end of June) and cops, now running to beat protestors shouting Black Lives Matter! These words represent merely a spark, the strike of a match, a passing echo of the collective words and shouts that will be uttered, carrying meaning, lasting only as long as it takes for evenings to dissolve and days to open again. To new thoughts, new words.