I have been thinking about whether or not I can reveal this in public, and I figure, well, okay.  While I’ll never post about anything that’s not G-rated, I might occasionally embarrass myself.  Humility is a good thing, right?  So here goes. 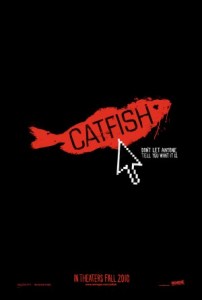 I finally got around to watching Catfish the movie this past summer.  If you haven’t seen it, it’s a mockumentary about social networking in which a family dupes the documentary filmmaker into thinking they are different people than they are.  By the end of the film, you’re overwhelmed by the amount of information people can piece together about you from the internet (or at least that was my reaction).  And if you’re like me (i.e., kind of naive, unsuspsecting, and trusting in ways you wish you weren’t sometimes because it makes you look unsmart), you thought it was an actual documentary, not a mockumentary.

So, yeah.  I actually emailed the creator after watching the film, thanking him for raising awareness about how easily the internet can create false identities and information.  Hopefully he couldn’t tell from what I said that I hadn’t yet discovered the film wasn’t a true story (which I didn’t figure out until a few hours after I’d watched it).

Speaking of feeling duped–as an educator, it often feels like media representations of schools, reform, and teachers aren’t always accurate.  And we don’t always know where to look to get the full story.  I just heard that NBC is hosting its second annual Education Nation, in which the state and direction of school reform will be discussed.  Sounds like a timely conversation, right?  The only catch is, it’s an event that is produced and funded by corporate dollars, which means it likely won’t be free, fair, or completely accurate.  In response, a group called FAIR (Fairness and Accuracy in Reporting) is hosting a free, open-to-the-public discussion about what’s really happening in the world of school reform on September 27th at 7pm at School of the Future.  Panelists include: Diane Ravitch: Author, NYU Research Professor of Education; Pedro Noguera: NYU Professor of Education; Brian Jones: Teacher-Activist; Leonie Haimson: Executive Director, Class Size Matters; Moderator: Laura Flanders: Author/Journalist.  Full details about the event available here.

I suppose the point of this post is: it’s important to hear all sides of a story–especially the ones that are true.  Technology makes it easier to disseminate information, but it also makes it easier to alter it in the process.  Join me and a bunch of other educators and activists in attending this event, and participate in the conversation about what might really help fix a broken system.