Here is my first post on the Anolis-themed blog Anole Annals:

Here is an interesting snake-related paper I came across in BMC Genomics this week:

This paper is cool because the authors wanted to understand the genetics and evolutionary patterns of venom in two species of snake: the many-banded krait (Bungarus multicinctus) and the Chinese cobra (Naja atra).

Venom is an adaptation involving thousands of complex proteins and enzymes, so the scientists wanted to compare gene expression in venom gland tissue. To do this they sequence the transcriptome, or only the information in the genome that is transcribed into mRNA (such as in exons) that will be translated by the cellular ribosomal machinery into amino acids. The DNA “translation” of  mRNA is known as a cDNA library. The scientists do a BLAST search to compare their sequences to a database of known proteins. The krait venom is composed of neurotoxin while the cobra venom contains both neurotoxin and cytotoxin, which causes the very cells of the prey to simply die.

As rare as they are, a bite from a venomous snake can kill a human one way, another way, or in a multitude of ways, depending on the snake.

When did venom first evolve? Probably way before snakes did.

According a 2006 paper in Nature, early in lizard evolution 200 million years ago there arose a “venom clade” that was the first to integrate toxicity and prey acquisition.  The descendants of those early squamates include all modern snakes, as well as anguimorph lizards – such as monitors (like the Komodo Dragon) and Gila monsters – and iguanians (they found venom proteins in the adorable Bearded Dragon!). 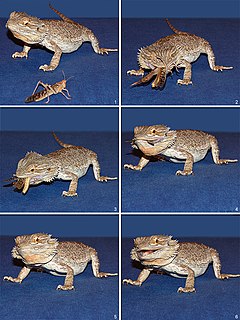 Happy New Year everybody! I thought I would kick off with a few posts about what transposable elements are, the specific types that I study, and why Anolis offers an interesting system that is worthy of attention.

One very important first step is to discuss (or get out of the way) the difference between DNA, genomes, and genes.

DNA is a molecule that is found on chromosomes within the nucleus of every cell  in every living thing (with few exceptions, such as mammalian red blood cells). It is the basic unit of heredity: you got all of your DNA from your mom and your dad, who got their DNA from their moms and dads, and so on.

All the DNA found in the cell nucleus is referred to as the genome (phew, that was a simple definition).

The most widely accepted definition of a gene is a portion of DNA that contains the correct code for creating proteins – essential for making an organism. How does that work? Well, it’s complicated, involving cellular machinery. Here is an awesome PBS video that describes it really well. Basically, genes contain the biological information necessary for organismal growth, development, and function.

Only a very small percentage of the DNA in the genome is actually in the form of protein-coding genes (at least in eukaryotes – viruses and bacteria tend to be very gene-dense). To get an idea of the scale I am talking about, this animation does a good job.

So what is all this other DNA that doesn’t code for proteins, and what is doing in our genomes? As a brief preview, transposable elements play a major role in this, but more on that in future posts.

Don’t forget to drive safely tonight, or not at all!

P.S. – For a cute slide show on the history (and science) behind the discovery of DNA, go to this link and click on the animation button.

While I’ve been cooking up what to post next in terms of my research, I have been building a series of RSS feeds that include instant PubMed search results for the latest research on Anolis lizards and transposable elements, updates from a really good Anolis blog Anole Annals, the phylogenetic methods blog Dechronization, and one of my personal faves, PZ Myers’ Pharyngula.

My Anolis research web page is up. Be sure to check out the interactive map of collecting localities featuring photographs of critters and students (and me) from the field.

I am in that purgatory zone somewhere between attaining candidacy and putting together my dissertation. The research is really rolling although I have been working my tuchus off. Perhaps I can write a little about what my research is about “in general” and then we’ll take it from there going forward.

I study lizards. I go out and I catch them, live among them, whatever. But I also study genomic parasites called transposable elements, which are these DNA sequences that live in our genome and copy and paste themselves. They can be considered “selfish genes”.  I am looking at how these elements behave in natural populations. That is, if their prevalence in populations is based on whether they are harmful or harmless to their hosts. Since these transposable elements are parasites that live within a host, the history of the host has a profound effect on their fate.

Therefore, the other part of my research addresses questions about the demographic history of the host species, Anolis carolinensis. Which populations are more closely related to each other? Do they differ in size? Is there a lot of migration between populations? All these factors affect genetic variation and their signatures allow me to paint a picture about the evolutionary history of these lizards.

This may be a bit much for the first post, but since transposable elements are important in the evolution of the genome, I hope that my research can shed light on how forces at the population level can have long-term effects on genome evolution.

Plus, I love going out in the field and catching lizards and snakes. 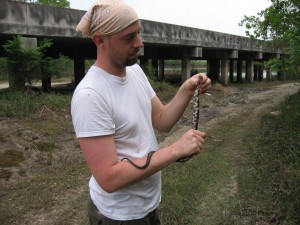