Over the past decade, Koreatown in Midtown Manhattan has drawn Koreans and non-Koreans, tourists and locals seeking everything Korean, from day spas to nightlife; Koreatown’s visitors see the area as a place to consume authentic, yet modern, Korean culture. Based on 130 in-depth interviews, participant observation, and archival research, Transclave: Branding Korea and Marketing Ethnicity in New York City examines the rise of a new kind of ethnic enclave. The transclave, is the result of South Korea’s nation-branding strategy and new economic and cultural policies; new patterns in Korean migration; changes in the sociocultural and urban landscape; and shifts in tourism and urban policies in New York City. I define the transclave as a commercialized ethnic space that exists exclusively for consumption, leisure, and entertainment. It is a space where transnational consumer culture from a sending country is embedded within a physical space in a receiving society, reflecting the landscape of the sending country’s consumer culture through the physical appearance of buildings and stores, and the inclusion of franchise brands. The transclave was part of a deliberate strategy to promote Korean culture and products overseas after the 1997 Asian financial crisis. The transclave has been envisioned as a cultural platform for the Korean government and relatively small to medium-sized Korean corporations to market the nation — and its brands– for both economic and political benefit.

In this book, I emphasize two dimensions of Koreatown as a transclave. First, Koreatown offers a space for “branding Korea.” New York City is one of the most critical global markets for nation-branding projects, and Manhattan’s Koreatown landscape reflects the flow of branding strategy and cultural policies and the Korean government’s cultural and economic investment. Because cultural products from sending countries are often placed by entrepreneurs in traditional ethnic enclaves, the new branding policies mobilize different types of business owners to create a new type of ethnic space. I pay particular attention to the symbolic ownership and struggles between Korean nationals and Korean Americans over who has rights to claim authenticity of the space and who belongs in it, or—more broadly—the nation.

Second, Koreatown in Manhattan is a space for “marketing and consuming ethnicity.” Americans expect Koreatown to be like other ethnic enclaves, such as Chinatowns and Little Italys. Koreatown is in line with these ethnic enclaves, but it is unique because of its high level of transnationality and commercial uses of the space. I thus locate Koreatown in the rise and fall of ethnic enclaves in urban America and their transition from a space of isolation to a space for residence and/or work, to most recently a space for entertainment, leisure, and consumption. This shift coincides with increased attention toward authenticity, ethnicity and the rise of the “omnivore society” among young and highly-educated Americans. Indulging in and having knowledge about ethnic foods is considered one way to show one’s understanding of diversity and multiculturalism and to establish a cosmopolitan identity in urban America. I focused on bottom-up engagement among three consumer groups: Korean nationals, Korean Americans, and non-Koreans. Rather than understanding them as passive receivers of market forces, I observed their active voices and ideas about the authenticity map of Koreatown.

My book project is  based on my dissertation. My dissertation has been embargoed for years, but the dissertation abstract is available at CUNY Academic Works and ProQuest. If you are interested in the abstract, click this link:  Abstract

I had many book project-related presentations at the academic conferences, such as ASA, AAAS, and AAS.

I also had an invited talk,  “32nd Street: Then & Now” at The Korea Society, which targets the general public. The talk is available online.

Here is another invited talk about Koreatown, “Transclave: Nation Branding, Authenticity, and Transnational Consumerism in Koreatown, NY” and the video is available at the James Joo-Jin Kim Program in Korean Studies at Penn. Click this link!

I co-edited an edited volume, Koreatowns: Exploring the Economics, Politics, and Identities of Korean Spatial Formation, with two other sociologists, Soo Mee Kim and Stephen Suh.

“This collection defines Koreatowns as spatial configurations that concentrate elements of “Korea” demographically, economically, politically, and culturally. The contributors provide exploratory accounts and critical evaluations of Koreatowns in different countries throughout the world. Ranging from familiar settings such as Los Angeles and New York City, to more unfamiliar locales such as Singapore, Beijing, Mexico, U.S.-Mexico borderlands, and the American Midwest, this collection not only examines the social characteristics and contours of these spaces, but also the types of discourses and symbols that they exude.” 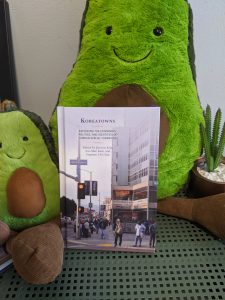 This is also available on Google Books. Click here!