We are pleased to announce the second annual Computer Science Student Workshop will be on March 21st 11:30 – 4:30 at the Graduate Center in room 5414.

Snacks, lunch, and refreshments will be served!

Come and present your latest work, share ideas, and discuss research with other Computer Science students at the Graduate Center! The event is an excellent opportunity to practice communicating your research in a low-pressure environment. When the time comes for your second exam, dissertation, or conference presentation you’ll feel more prepared. Even if you’re not presenting, still come to support your peers and see what’s happening in other fields.

Comp Sci All Student Meeting: Oct 25. Lunch will be served!

We would like to introduce all the new student representatives, hear your feedback about the program and share news about all the changes going on in our department.

Have Feedback? Something to add? 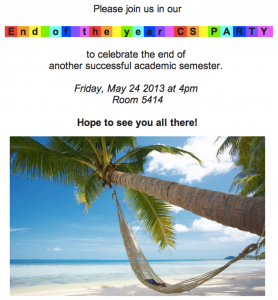 April 26, 2013 – Andrew Gelman, Professor of Statistics and Political Science at Columbia University, presented his seminar, “Causality and Statistical Learning” at the Graduate Center.

This was the final Data Mining Initiative seminar of the Spring Semester, but Professor Gelman certainly delivered an entertaining and informative talk. If you were not able to attend the talk, be sure to catch it here.

Information extraction, the task of finding entities, relations, and events from natural language, is an important building block in computational semantics. However, information extraction models of complex events with many subparts tend to model the parts independently. This sometimes leads them to predict inconsistent structures.

For example, an independent classifier for temporal relations could potentially predict that an individual died before they were born. While completely eliminating these assumptions is often difficult or intractable, this talk explores two mechanisms for ameliorating their effect.

The first technique casts a biomedical event extraction task as a dependency parsing problem. By converting event structures to a labeled dependency modification graph, off-the-shelf parsers can be used to perform event extraction with minimal modification. Other parsing strategies such as model combination and reranking can be employed for improved performance.

Bio:
David McClosky is a research scientist at IBM Research working on the Watson project. His primary research interests lie at the intersection of syntactic parsing and information extraction. He obtained his Ph.D. in Computer Science at Brown University in 2009 on semi-supervised methods and domain adaptation for parsing. More recently, he was a postdoctoral researcher in the Natural Language Processing Group in the Stanford Computer Science Department. His semi-supervised biomedical syntactic parser was used by all leading systems in the BioNLP 2011 shared task and his event extractor was a component in the best performing system.

The submission deadline has now been extended until April 22nd.  After that date, proposals will no longer be accepted.

Registration for CSSW is open

Registration for the Computer Science Student Workshop is open! Please register until April 12 (especially if you are planning to present a poster). Use the registration link in order to register.

Hope to see you there!

Come and present your latest work, share ideas and meet up with other Computer Science Program students at the Graduate Center!  Your student government and program committee representatives will be planning a day for everyone to do exactly this on May 3rd.

The event is an excellent opportunity to practice communicating your research in a low-stakes environment   When the time comes for that upcoming exam, or conference presentation, you’ll fell much more at ease.   If you’re not presenting, still come to support your peers.

Please register here by April 12, so we know how many to expect and how to plan the day.

Snacks, lunch and refreshments will be provided.