I have migrated the content from this blog over to anniedellaria.wordpress.com. 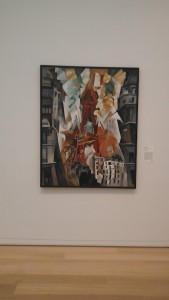 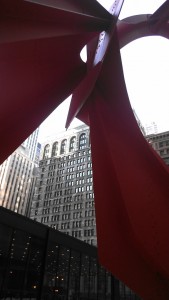 Taking a day off last week from the annual SCMS conference, I went to Chicago’s major public art locations (Millennium Park, Calder’s Flamingo, the Chicago Picasso) and the Art Institute.  One of my favorite paintings in the collection, Delaunay’s Champs de Mars: The Red Tower, part of his series of “simultaneous” painting of the Eiffel Tower, offered some productive formal comparison to Calder’s Flamingo, the first work commissioned under the General Services Administration’s Percent for Art program.

Delaunay’s canvas, completed at a time when Italian Futurists were all the rage in Paris, contains the dissolution of the object of the Cubists and Futurists, but rather than paint small scale subjects (like the Cubists) or dissolve the object through a subject in motion (like the Futurists), Delaunay’s tower breaks open in a way that celebrates the movement of the flaneur/cameraman.  This modern urban dweller moves under and around the tower to capture exciting juxtapositions with the surrounding buildings, rays of sunlight, or dramatic disorientations.

For anyone to wanders into the bland abyss that is the modernist plaza in front of the Kluczynski Federal Building in Chicago, these kinds of dramatic interplay between abstract and architectural form is made possible by a certain type of movement.  Calder’s actual sculpture, taken as a discrete object, is most definitely an example of “plop art”: it fits the agoraphobic void left by the large empty space in front of Mies van der Rohe’s building, it comes from a big name artist, and has relatively little to do with the site (I have not been in Chicago in the summertime, but I imagine flamingos are nowhere to be seen).  According to the Federal Architecture Project’s documents, the sculpture was intented to create “street vitality” and “a lively pedestrian setting,” but despite it’s biomorphic shape and large scale (ostensibly designed as a transition from the human scale to the surrounding architecture), the object still feels hopelessly overwhelmed by the surrounding International Style buildings and the large, blank space with no seating or amenities to pedestrians. 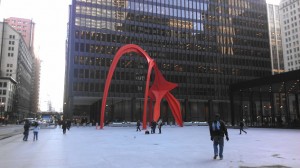 Calder’s Flamingo from the edge of the plaza.
Photo: Annie Dell’Aria

It is only when we enter into Flamingo and adopt a worm’s eye photographic perspective that it can rearrange our spatial relationship to the city, creating views that merge architectural and abstract sculptural form and break space into interpenetrating facets.  In a way, public art here reproduces the effects of modernist painting and contemporary installation – a fractured sense of space and time – but only for those who enter into its form and encounter Calder’s “stabile” as a space rather than an object.  This kind of haptic encounter with the plaza and its public art connects to the cinematic nature of urban movement and mobility.  As contemporary flaneurs we are constantly stitching together moments, sites, and sounds through movement, and each fragment intersects with the previous and the next to form its own personal montage.  Delaunay’s simultaneity, Doug Aitken’s multi-screen projections, and cinematic montage all recreate the disjointed visual experience of contemporary mobility. 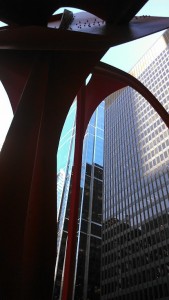 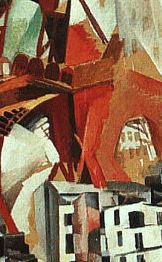 This blog is dedicated to the experiences of visual media spectatorship in spaces.  As we stroll the urban streets or speed down the highway, media screens come into our visual fields in ways that fundamentally change and alter our relationship to both public and private space.  This blog reflects on those intersections in daily life, media culture, and art through short-form reflection pieces and photographic essays.

The hope is that this practice will encourage and inspire my current dissertation research into this field, rather than become another online distraction from the arduous process of PhD completion.

Thank you for passing by. 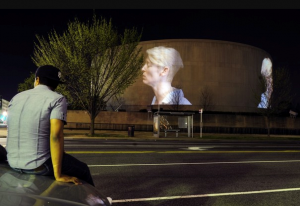