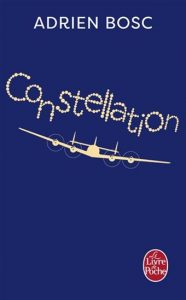 Adrien Bosc’s first and best-selling novel Constellation (2014, available in translation from Other Press) falls into that grey area in between history and fiction. It’s the story of the 1949 crash of a transatlantic flight of an Air France Lockheed Constellation, a plane designed by Howard Hughes. The crash is known for the deaths of two French stars on board, the boxer Marcel Cerdan and the prodigy violinist Ginette Neveu. Bosc’s novel, though, expands our knowledge about a good number of the other victims of this crash, as well as on the resulting search for answers about how it happened.

This new knowledge about the Constellation’s passengers comes by way of both research and imagination. Bosc, as narrator, inserts himself into the story from time to time as he reflects on his research, for instance in his communications years after the event with descendants of one the deceased. And yet, this is a novel, it must be, for the personal conversations of the passengers in the plane’s hanger before boarding were not written; every thought and action of the Air France investigative party searching for clues at Redondo Mountain were not recorded, even though official reports were certainly written.

Among the most memorable characters of the novel’s vignettes are an American businessman and some Basque farmers. Herman “Kay” Kamen convinced Walt Disney to license his famous characters for the production of branded merchandise. It was Kamen’s idea to create a Mickey Mouse watch, an item that sold in the millions in the 20th century and which made Kamen’s firm very rich. The three Basque farmers on the flight, to the contrary, were headed to the American West, where a contract for ranch work–and a chance to escape the poor financial prospects of their own region–was awaiting them.

This look into the reality of the past with its surprises (such as Basque-American immigration) and its forgotten heroes is quite interesting on its own. But what made this novel engaging was the personal detail that surpassed the mere historical: the imagined conversations between passengers and their families leading up to the flight, the reasons why these particular people were on this particular flight, the stories of almost changing plans that might have saved a life. These reasons why seem to be the reason for the book. The name of the aircraft model inspired Bosc’s reflections in the novel of the various people who died, with their separate lives and distinct reasons for taking this flight. Taken altogether, they resemble a constellation of separate stars, which assemble to create a cohesive image from a certain (in this case authorial) perspective. The author’s role, in this particular book, seems to be to give name to each of those stars, not just those which shone the brightest.

Why I’m voting no on the contract at CUNY

Posts by A. Martin

Comments by A. Martin